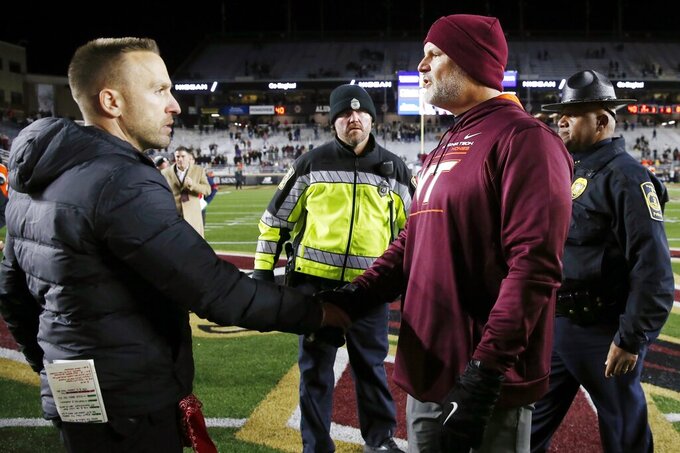 And while the Hokies will be celebrating Senior Day Saturday, there are questions about coach Justin Fuente’s future.

The Hokies (4-5, 2-3 Atlantic Coast Conference) have lost four of their last five games, including the last three at home, and managed just a 3-4 record in their opening stretch that saw them play six of their first seven games at home.

While their entrance to Metallica's “Enter Sandman” has long been considered among the best in college football, it has increasingly become an opportunity for fans to lustily boo Fuente, who is in his sixth season and 42-31 overall.

The coach would prefer the attention be on the seniors finishing their careers.

“It’s a great group of kids that are growing into adults that have given a lot to this program," Fuente said. “I think we all owe a tremendous debt of gratitude to them and we need to do everything in our power to send them off the right way."

Duke has lost five straight with only one of those – 31-27 to Georgia Tech on Oct. 9 – has come by single-digit margins.

“Our job as a staff is to get them playing better, and that’s where it falls on my shoulders," coach David Cutcliffe said. “And their job as a squad is to take that coaching and put that into effect on the game field. It’s a collective opportunity to create better habits to win games. That’s simply where we are right now.”

Some other things to watch when Duke plays at Virginia Tech:

The Blue Devils won't face an elite league quarterback in this game, and might not even face Virginia Tech starter Braxton Burmeister. He sustained an upper body injury in a 17-3 loss at Boston College. “He'll go if he can,” Fuente said earlier this week.

Duke quarterback Gunnar Holmberg's availability will be a game-time decision. Holmberg left the Blue Devils' 54-29 loss to Pittsburgh last weekend after taking a sack and appearing to injure his left side. If he can't go, Riley Leonard, a freshman who replaced Holmberg at Pitt, will likely get the nod.

A bright spot for the Hokies has been the development of tailback Malachi Thomas over the last three games. He topped 100 yards against Syracuse and Georgia Tech and had 70 yards on 13 carries in the loss to Boston College.

Duke has leaned heavily on Mataeo Durant all season. Durant ranks fifth in the Bowl Subdivision by running for 118 yards per game, and last week became the first Duke player to reach 1,000 yards in a season since Chris Douglas in 2003.

“He’s earned it,” Cutcliffe said of the attention Durant is receiving. “We’ve all seen it. Thank goodness he’s a far cry from being done. He’s feeling good. He’s hungry.”

Fuente hopes Hokies fans will focus more on honoring the 20 or so seniors wrapping up their careers than on expressing their distaste for their coach.