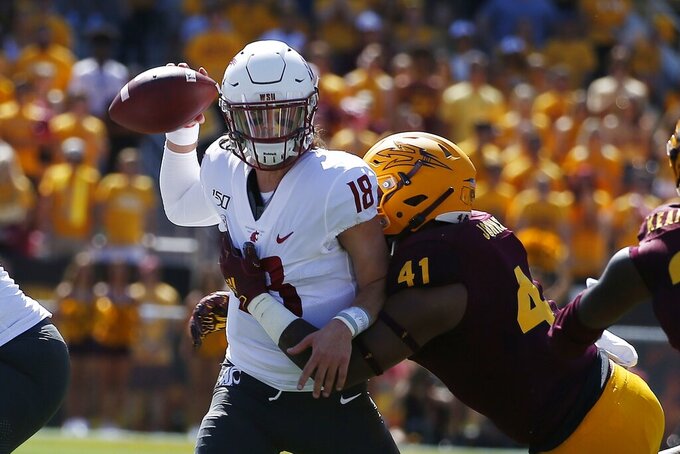 Washington State coach Mike Leach has seen improvement in his defense but more is needed as the Cougars seek their first Pac-12 win of the season when Colorado visits Saturday.

The Cougars have given up 143 points and 1,715 yards in losing to UCLA, No. 13 Utah and No. 17 Arizona State in consecutive games. The losses to UCLA and Utah prompted defensive coordinator Tracy Claeys to abruptly resign two weeks ago.

But the defense still gave up a touchdown with 34 seconds left to give Arizona State a 38-34 victory last Saturday, keeping the Cougars (3-3, 0-3 Pac-12) winless in the conference. It was the last in a series of big plays for the Sun Devils.

"We've got kind of a quiet group," Leach said. "We need a few alpha guys in there that kind of lead the charge."

Colorado is also looking to right itself. While Washington State lost in the final seconds, Colorado (3-3, 1-2) got blown out 45-3 by No. 12 Oregon last week for a second consecutive league loss.

"Each individual guy has to get better and fix his individual issues, whatever they are," coach Mel Tucker said. "Then we can get better."

Other things to know as the Cougars prepare to host the Buffaloes:

AERIAL ASSAULT: Colorado's Tucker is wary of Washington State's passing attack. The Cougars lead the nation in passing at 452 yards per game behind quarterback Anthony Gordon and top the Pac-12 in scoring at 43 points per game. Colorado comes in yielding 307 passing yards per game. "It's the pure Air Raid," Tucker said. "It's not like a version of the Air Raid. They really have it down to a science and they have a quarterback that can run it."

SOCIAL MEDIA BAN: Leach banned his players from social media after the loss to Utah, and the ban is expected to extend the rest of the season. The coach is also taking a break from Twitter, although assistant coaches can still use social media as part of recruiting. "I thought they were distracted with it," Leach said. "I wish I had done it in camp."

HBO: The cameras for HBO's "24/7 College Football" show were in Pullman all week recording the preparations leading up to the Colorado game. The show has also followed Florida, Penn State and Arizona State this season. The Washington State episode is expected to air Oct. 23. "It's good for the school and good for everybody," Leach said. But "we've got to go about our business and not be distracted." Asked if he would prefer to watch the football program or "Game of Thrones," Leach picked the latter. "I'd watch somebody else before I watch me," he said.

STAMPEDING BUFFALO: Leach is impressed by Colorado receiver Laviska Shenault, a 220-pounder who will also sometimes run the ball. "He's a key guy. He's explosive. He's a bigger guy than people realize," Leach said. Shenault has caught 21 passes for 296 yards and two touchdowns this season. He has run the ball nine times for 66 yards and one TD.

THE COUGAR WAY: Leach said Washington State rarely has the talent to overpower other football teams. "We have always won games around here because we were tougher than our opponents," Leach said. "This has always been a deal where you scratch and claw for anything you have ... we've got to maintain that mentality all the time."