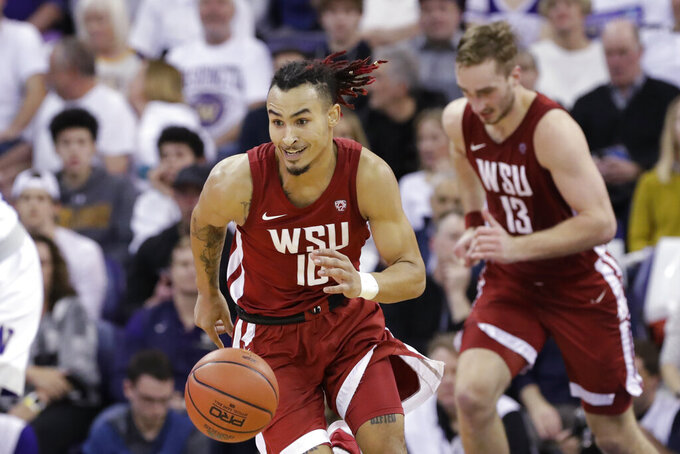 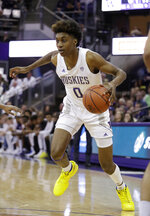 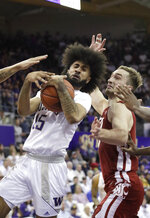 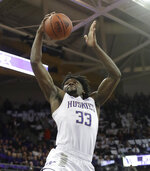 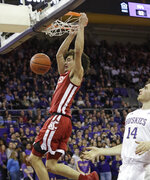 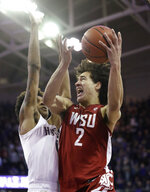 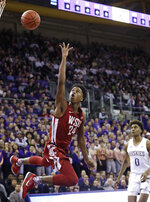 SEATTLE (AP) — Issac Bonton stomped on the purple “W” at midcourt as he slammed the ball down. Seattle-native Noah Williams yelled, “This is my city,” pointing at the floor and celebrating after the final buzzer.

Even new Washington State football coach Nick Rolovich found his way into the celebrations in the winning locker room.

While it was far from straightforward, the Cougars thoroughly enjoyed sweeping their rivals.

“We wanted to come in and make a statement,” Bonton said. “There's been a lot of talk back and forth. But you know, we're not really into that. We're into winning games.”

CJ Elleby scored 21 points, Bonton scored 18 of his 20 points in the second half, and Washington State completed a season-sweep of rival Washington with a 78-74 win on Friday night.

The Cougars (15-14, 6-10 Pac-12) swept the season series for the first time since the 2016-17 season. Washington State built a big halftime lead, watched Washington rally to take the lead midway through the second half before the Cougars rallied and held on in the closing minutes.

Bonton was the catalyst of Washington State’s decisive answer. He scored 15 points in the final 9-plus minutes, including eight of 11 points in a 64-second span when the Cougars went from being down one to up 10.

Bonton had missed the previous three games due to a hip injury.

“He's really invested his time and energy and been a really good player for us in league and kind of gotten to where we're pretty dependent on him,” Washington State coach Kyle Smith said.

Williams added 15 points, including a pair of free throws with five seconds left that clinched the victory.

Jaden McDaniels led Washington (13-16, 3-13) with 19 points. The Huskies snapped a nine-game losing streak last Saturday with a win over California, but lost yet another close game in conference play. The Huskies are 0-9 in conference games decided by six points or less. Nahziah Carter added 14 points, but missed on a difficult drive inside the final 10 seconds that could have tied the game.

It was a wild second-half where both teams went on major runs and momentum swung constantly.

Washington erased all of the 13-point halftime deficit and led 51-50 after Jamal Bey’s baseline dunk. But Bey made a critical mistake on the other end that sparked the Cougars.

Bey lingered a little too long in the face of Bonton after swatting his shot, and was called for a technical foul. The technical ended up being a five-point possession for Washington State after Bonton hit both free throws and Elleby got free for a corner 3-pointer.

Stewart picked up his fourth foul on a charge at the other end and Bonton hit consecutive 3s. In just 64 seconds Washington State went from down one to up 10.

“It was big for us just to give us a boost, a confidence boost," Bonton said. "They kind of got after us a little bit and lost ourselves a little bit, but we stuck with it,”

Washington pulled within 71-67 on a 3-pointer from Marcus Tsohonis with 2:44 left, but RaeQuan Battle missed an open 3 moments later after a Washington State turnover that could have trimmed the lead to one.

Elijah Hardy’s 3-pointer with 1:09 left pulled Washington within 75-72 and the Cougars committed a shot-clock violation on their next possession. The lead was down to one after Carter’s driving basket with 23 seconds left.

Bonton split a pair of free throws for a 76-74 Cougars lead, but Carter was unable to get a clean look on his drive into the lane and Williams clinched it at the free-throw line.

Washington State could still be anywhere from the No. 8 to the No. 11 seed for the conference tournament in Las Vegas depending on the final two weekends of games.

Washington is almost assured of being the No. 12 seed. The Huskies could get no higher than 11th, but would need to win their final two games and have Oregon State lose both of its final two.

Washington State: The Cougars travel to Arizona next Thursday.

Washington: The Huskies travel to Arizona State next Thursday.