Washington State's Jayden de Laura glad to be back on field 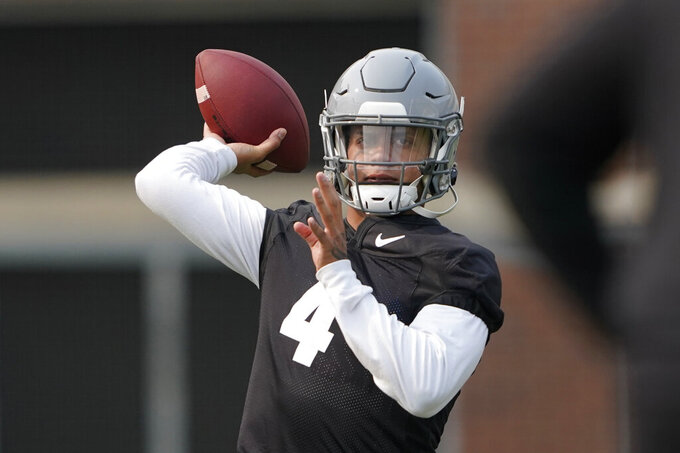 PULLMAN, Wash. (AP) — Washington State quarterback Jayden de Laura is glad to be back on the field after a tumultuous offseason that saw him miss spring football because of a legal issue that was eventually resolved in his favor.

De Laura is in a competition to retain the starter's job with Tennessee graduate transfer Jarrett Guarantano and junior Cammon Cooper. De Laura won the starting job last year as a freshman and led the Cougars to a 1-3 record in a season shortened by the pandemic.

“I missed the game,” de Laura said as Washington State opened its preseason camp Friday. “I’m glad to be back right now.”

He was suspended from the team and missed spring practice after being arrested in February by Pullman, Washington, police on suspicion of DUI after going the wrong way on a street and driving through a stop sign. De Laura failed a sobriety test and refused a Breathalyzer but in July he was found not guilty of misdemeanor DUI charges and reinstated.

During his time away from the program, de Laura said he “learned not to be selfish.”

“That was where I grew the most,” he said.

A high school star from Hawaii, de Laura completed 78 of 129 passes for 886 yards and five touchdowns while also rushing for two touchdowns last season for the Cougars. The first true freshman to start a season opener at WSU, de Laura was named the Pac-12’s Freshman of the Week after contributing three touchdowns to the Cougars’ opening win at Oregon State.

But he was mistake-prone at times, throwing four interceptions and losing a fumble in Washington State’s loss at Southern California. After throwing four touchdowns and one interception in his first two starts, de Laura threw just one TD and had three picks in the final two games.

Coach Nick Rolovich said in making the decision on a starter, he’ll be looking for someone who can “establish belief in his teammates and trust. Combine that with who is able to move the ball down the field consistently.”

The Cougars have had quarterback battles for four straight seasons and star running back Max Borghi said it's the norm for him.

“I've learned I will not know who my quarterback is going to be until (game) day,” Borghi said.