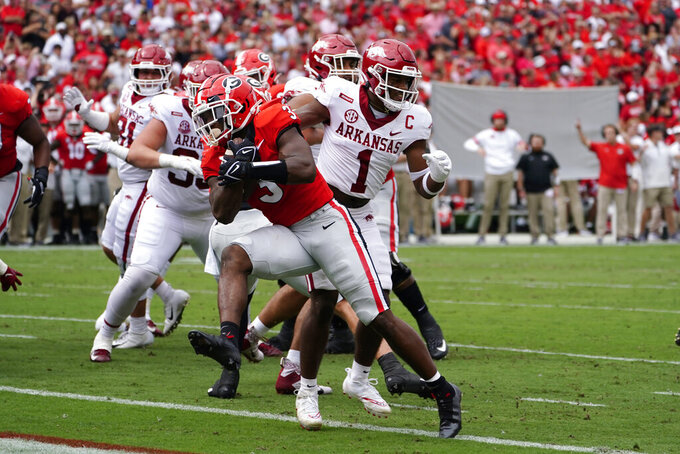 Georgia running back Zamir White (3) gets past Arkansas defensive back Jalen Catalon (1) to score a touchdown during the first half of an NCAA college football game Saturday, Oct. 2, 2021, in Athens, Ga.. (AP Photo/John Bazemore) 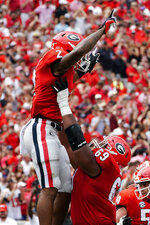 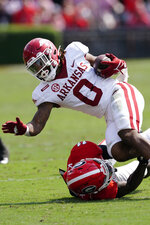 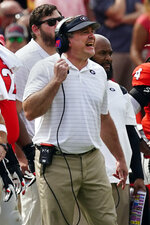 ATHENS, Ga. (AP) — Georgia's determination to win its top-10 matchup against Arkansas on the ground had nothing to do with which quarterback started for the Bulldogs.

Instead, it was all about taking what the Arkansas defense gave Georgia — and the Bulldogs just kept taking and taking. And that made it even easier for the Georgia defense to dominate.

Zamir White rushed for two touchdowns and recovered a blocked punt for another score, and No. 2 Georgia pounded No. 8 Arkansas 37-0 on Saturday in the Bulldogs' second consecutive shutout.

Georgia (5-0, 3-0 Southeastern Conference) raced to a 21-0 lead in the first quarter despite playing without quarterback JT Daniels, who was held out with a right lat injury.

Stetson Bennett filled in for Daniels and passed for only 72 yards as the Bulldogs relied on their running game and top-rated defense to beat Arkansas (4-1, 1-1).

“They were basically challenging us, could we run the ball,” Bennett said. “They said we couldn’t but we said we could today.”

The Bulldogs rushed for 273 yards and wore down the Arkansas defense, holding the ball for 36 minutes.

The matchup of top-10 SEC teams turned into a statement game for Georgia.

“I don’t want to simplify this, but they just whipped us physically,” Pittman said. “We couldn’t block them and we couldn’t get off blocks for much of the day."

Georgia stuck to the run as Arkansas aligned its defense with extra defensive backs.

Georgia stretched its lead to 21-0 when walk-on defensive back Dan Jackson blocked Reid Bauer's punt and White fell on the ball in the end zone.

Arkansas also had quarterback questions after KJ Jefferson missed most of the second half of last week’s win over Texas A&M with a bruised left knee. Jefferson completed 8 of 13 passes for 65 yards. Malik Hornsby replaced Jefferson in the final quarter.

Arkansas linebacker Grant Morgan said the Razorbacks would recover from the lopsided loss.

Jack Podlesny kicked field goals of 46, 30 and 37 yards. Cam Little was wide right from 37 yards in the second quarter for the Razorbacks.

Arkansas: The Razorbacks failed to match the top-10 standards set by Georgia. They hurt themselves with 13 penalties for 100 yards, including two false-start flags before they could run a play. Pressure caused by Georgia's defense and the crowd noise, especially at the start of the game, was overwhelming.

Georgia: The Bulldogs showed impressive depth when forced to play without their starting quarterback. Bennett managed the game, completing a few early passes and then leaning heavily on the Bulldogs' long list of running backs. The defense showed it deserves its top ranking, making the team look like a serious contender for the same honor.

The Bulldogs continued their committee approach at running back. James Cook had 87 yards on 12 carries. Kenny McIntosh had 57 yards. Kendall Milton ran for 48 yards, including a 1-yard touchdown.

Daniels was in uniform, but he missed his second game of the season after testing the injury in pregame warmups. Smart said before the game Daniels' status was based on the pregame work. After the game, there seemed to be less certainty that the junior was close to playing.

“We think we’re going to be able to get him back but we don’t know when,” Smart said, adding “JT is frustrated. He wants to play quarterback and he doesn’t get to when he has an injury.”

Arkansas: The Razorbacks' defense recovered after Georgia's 21-0 first-quarter lead, allowing only two field goals in the next two quarters. It was too late to save Arkansas from a probable drop in the Top 25. Despite fading in the final quarter, Arkansas may not fall far in the poll, thanks to wins over Top 25 teams Texas and Texas A&M.

Georgia: The Bulldogs solidified their No. 2 ranking. Another dominant defensive showing over an Arkansas team that was averaging 35.8 points could earn Georgia more first-place votes.

Arkansas visits No. 12 Mississippi on Saturday.

Georgia visits No. 22 Auburn on Saturday. Georgia has a four-game win streak in the series, including a 27-6 victory last season in Athens.