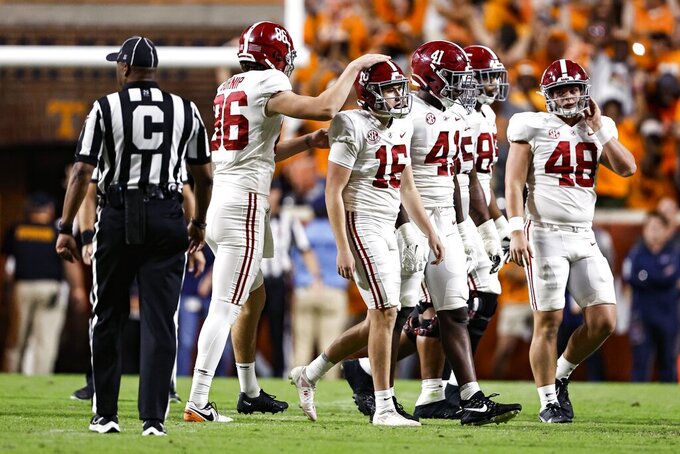 Alabama place kicker Will Reichard (16) walks off the field after missing a field goal during the second half of an NCAA college football game against Tennessee Saturday, Oct. 15, 2022, in Knoxville, Tenn. Tennessee won 52-49. (AP Photo/Wade Payne)

Alabama loses so infrequently it seems to shift the shape of the season when it happens.

The Crimson Tide took an L on Saturday at Tennessee that pushed the Volunteers to No. 3 in the AP Top 25 presented by Regions Bank. The Vols received 15 first-place votes, the most they have gotten since 1999.

After falling on a field goal as time expired, the Crimson Tide slipped three spots to No. 6, snapping a streak of 40 straight polls in the top five. Alabama is the highest ranked team that has lost.

The Tide has won a couple of games decided in the final seconds this season before letting one get away so it's understandable some AP voters — and fans — are seeing a trend that could lead to more losses.

But Alabama has only lost multiple regular-season games (excluding conference championships) in a season twice (2010 and 2019) since 2008.

Maybe even more impressive is just how difficult it has been to put the Tide away in the regular season. In 13 regular-season losses over that span, the average margin has been 5.4 points.

There have been two double-digit losses, none by more than 14, and three on walk-off field goals, including the last two.

Reality Check cautions against making any grand proclamations about the Alabama dynasty's long-term health and is fine with the Tide's short fall.

Next: vs. Florida, Oct. 29 in Jacksonville, Florida.

Reality check: Been a quiet couple of weeks for TE Brock Bowers (six catches for 51 yards). Expect that to change as the games get more challenging down the stretch.

Next: vs. Iowa, Saturday.

Reality check: C.J. Stroud has relinquished Heisman front-runner status (for whatever that's worth in October) to Tennessee's Hendon Hooker, but plenty of time and bigger challenges are left for the Buckeyes' quarterback.

Next: vs. Tennessee-Martin, Saturday.

Reality check: The Vols' offensive style, up-tempo and lots of explosive plays, puts extra pressure on its defense. It's vulnerable, but holds up well against the run (2.93 yards per carry against) and won't face many more opponents built to exploit the weaknesses.

Ranked: Good case for the Wolverines to be ahead of the Buckeyes.

Reality check: Tigers have yet to get the running game cranking, but RB Will Shipley had his best game (120 yards on 20 carries) this season against a Power Five opponent vs. Florida State.

Next: vs. No. 24 Mississippi State, Saturday.

Reality check: Penalties (9.4 per game, 129th in the nation) and turnovers (minus-5 margin) hurt. The Tide has been sloppy but has also outgained its opponent in each game.

Reality check: Can the Rebels' spectacular and versatile running game — three 100-yard rushers against Auburn — keep them unbeaten until Alabama comes to Oxford on Nov. 12?

Reality check: Horned Frogs get a fourth straight ranked opponent and each game has gotten increasingly difficult. Can they keep up the intensity?

Reality check: Duke transfer WR Jake Bobo (five touchdowns and 16 yards per catch) has been one of the best portal additions in the Pac-12.

Ranked: Feels high, but we'll know for sure this week.

Reality check: Since allowing 9.2 yards per play to Georgia, the Ducks have held their next five opponents below 6.0. That's a long way from dominant, but solid.

Reality check: QB Spencer Sanders got off to a promising start this season, but has completed fewer than half his passes in the last two games.

Reality check: Without sacks and turnovers, the Trojans' pass defense had no solutions against Utah. And now USC has to worry about the health of WR Jordan Addison (lower body).

Reality check: A so-so touchdown conversion rate in the red zone (64%) needs to improve when the Deacs get into a tough November schedule.

Reality check: Oronde Gadsen II might be the most valuable receiver in the country to his team. Son of the former NFL receiver has more than twice as many receiving yards (507) as next best for Syracuse.

Next: vs. Minnesota, Saturday.

Reality check: Nittany Lions got manhandled by Michigan in a way that makes fans question the direction of the program. Not necessarily fair, but after two straight lackluster seasons patience is thin.

Reality check: DE Felix Anudike-Uzomah is tied for the national lead in sacks per game (1.08), but is still underrated nationally while being one of the top players in the Big 12.

Reality check: Two teams have allowed only five touchdowns in seven games: Georgia and Illinois. The Illini defense has been a force.

Reality check: Having both QB Will Levis and RB Chris Rodriguez in the lineup and healthy led to the Wildcats' best offensive game of the season against Mississippi State.

Ranked: Hard to tell if Wildcats are over-ranked or under.

Next: at No. 11 Oklahoma State, Saturday.

Reality check: QB Quinn Ewers has seven touchdown passes and one interception in two games since returning from a shoulder injury.

Next: at SMU, Saturday.

Reality check: Best linebacker in the country? Maybe Ivan Pace Jr., who leads the nation in tackles for loss at 2.25 per game.

Reality check: QB Drake Maye is tied for the national lead with 24 touchdown passes and might be the best quarterback in the ACC as a first-year starter.

Reality check: QB Devin Leary will miss the rest of the season after shoulder surgery. The Wolfpack's offense was inconsistent with him and was in really bad shape without him at Syracuse.

Ranked: Without Leary, this is too high.

Reality check: Bulldogs have flashed the form of a top-15 team, but can't sustain it.

Next: vs. Memphis, Saturday

Reality check: A stingy defense ranked 11th in the country in yards per play (4.68) has the Green Wave ranked for the first time in 24 years.