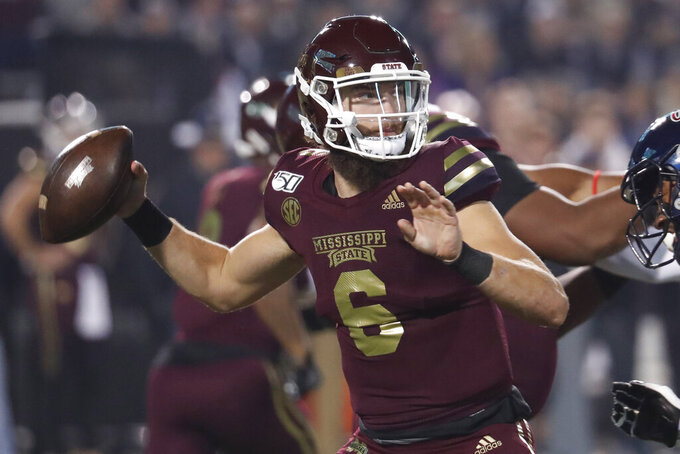 FILE - Then-Mississippi State quarterback Garrett Shrader (6) sets up to pass against Mississippi during the first half of an NCAA college football game in Starkville, Miss., in this Thursday, Nov. 28, 2019, file photo. Dino Babers starts his sixth season at Syracuse and there's nowhere to go but up. Syracuse finished 112th overall in 2020, with an offense that struggled behind two-year starter Tommy DeVito, who missed much of last season with an injury. Dual-threat quarterback Garrett Shrader, a transfer from Mississippi State, is in the mix now. (AP Photo/Rogelio V. Solis, File)

“We want to play both guys. We're going to play both guys,” Babers said after practice. “I think the biggest thing is that we need to see them both in a game. We need to see production on the field in games. Practice is great, but eventually it comes down to who’s making plays in the game. We’ve just got to see how it goes.”

DeVito, a redshirt junior whose experience in the Orange's fast-paced system gives him an advantage, missed the last seven games of 2020 with an injury. Syracuse finished 1-10 and ended up using three other players at the position — fifth-year senior Rex Culpepper and freshmen JaCobian Morgan and Dillon Markiewicz.

In 24 games over three seasons, DeVito is 305 for 520 for 3,479 yards and 27 touchdowns with 10 interceptions but has taken a beating behind an injury-riddled offensive line. Last season he was sacked 20 times in four games before suffering a season-ending leg injury.

Shrader transferred from Mississippi State, where in 2019 he was one of three freshman quarterbacks to pass for 1,000 yards and rush for 500 yards. He also finished No. 28 nationally and No. 3 in the Southeastern Conference in yards per completion (13.3).

“He can make plays with his arm and his legs, and the best way to see those types of players is you’ve got to put them in the game and see how it works out,” Babers said. “The biggest thing is I'm excited that we've got two guys that we want to see. I wish we had one. Everybody says if you've got two, you've got none. We'll see.”

Syracuse opens the season at Ohio on Sept. 4.