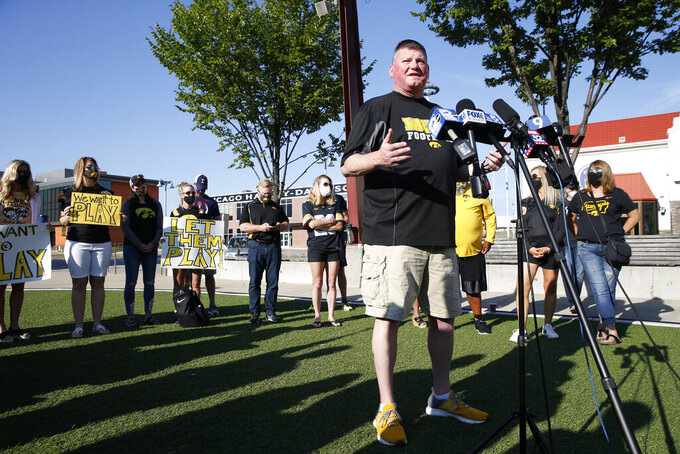 Jay Kallenberger, parent of two University of Iowa football players, speaks at a press conference asking for more transparency and communication by the Big Ten outside of their headquarters on Friday, August 21, 2020 in Rosemont. Parents of Big Ten football players, upset over the process that led to the postponement of the season until spring, held a protest near the conference's Chicago-area headquarters Friday while an attorney in Nebraska demanded commissioner Kevin Warren turn over material illustrating how the decision was made. (Stacey Wescott/Chicago Tribune via AP)

Parents of Big Ten football players, upset over the process that led to the postponement of the fall season, held a protest near the conference's Chicago-area headquarters Friday while an attorney in Nebraska demanded Commissioner Kevin Warren turn over material illustrating how the decision was made.

The Big Ten and Pac-12 announced Aug. 11 that health and safety concerns over the coronavirus led them to shut down football this fall. The other three major conferences, the Atlantic Coast, Big 12 and Southeastern, are planning to play.

Groups of player parents from several Big Ten schools have complained that Warren was not forthcoming in explaining the process that led to the school presidents' decision. A more detailed explanation Warren offered in an open letter this week was not to their satisfaction.

“We've got a voice. We want to use it,” said Jay Kallenberger, father of Iowa offensive lineman Mark Kallenberger. “Our kids may not be comfortable speaking out or the programs may say, 'Hey, just sit back, there's not a lot you can say right now.' Transparency, that's what we want.”

The protest started with a 17-second moment of silence to recognize the 170,000 Americans who have died from COVID-19.

“We do respect there's a pandemic out here,” Wade said, waving off critics of the parents' movement who say the moms and dads are willing to put their sons at risk so they can play football.

Wade called on Warren to set up a videoconference with parents and athletic directors to discuss in detail how the decision was reached. Kallenberger said the parents also want Warren to provide clarity on whether there was a vote of presidents and, if so, how each school voted.

Warren wrote in his letter this week that the presidents' vote “was overwhelmingly in support of postponing fall sports and will not be revisited.”

However, Minnesota president Joan Gabel said last week, “We didn't vote, per se. It’s a deliberative process where we came to a decision together.”

Attorney Mike Flood of Norfolk, Nebraska, in a letter sent to Warren on Friday, threatened a federal lawsuit if documents and other materials related to the decision aren't turned over by Monday.

Flood, a former speaker of the Nebraska Legislature, said he represents the parents of 11 Cornhuskers players. Flood also is owner of Flood Communications, which operates eight radio stations in the state, five of which broadcast football games as part of the Husker Sports Network.

Flood's letter pointed out that Warren's son is preparing to play this season in the SEC.

“It is especially troubling that you have made the decision that it is in your son's best interest to play football this season at Mississippi State," Flood wrote, "yet you have taken that decision out of the hands of our clients.”

Flood is asking the conference to produce documents relating to any votes taken, how each school voted, meeting minutes and all audio and video recordings and transcripts of meetings where votes were cast. He also wants copies of studies, scientific data and medical information or advice considered by the presidents.

“One of the parents, and I think she speaks for most of them, says, ‘Nobody loves their kids more than we do. Nobody wants to see them safe more than we do. But what is it that the Big Ten has that has compelled them to do this compared to the other conferences that are planning to play?’ We'd like to know," Flood said.