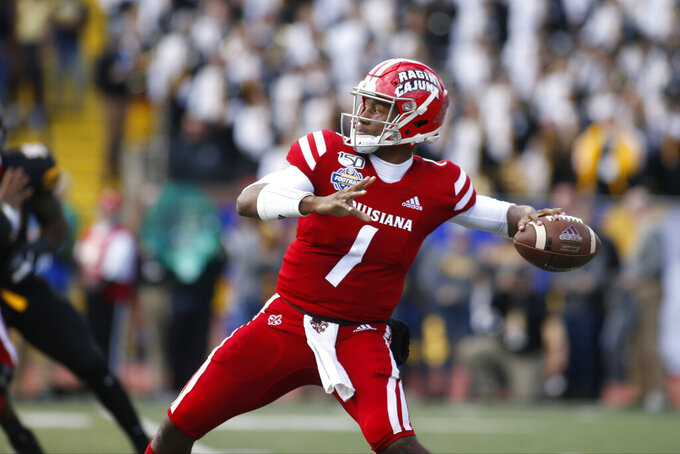 Louisiana-Lafayette quarterback Levi Lewis (1) throws a pass during the first half of an NCAA college football game in the Sun Belt Football Championship against Appalachian State on Saturday, Dec. 7, 2019, in Boone, N.C. (AP Photo/Brian Blanco)

“It better be the Cotton Bowl!" Drinkwitz told fans on the field at Kidd Brewer Stadium when asked where he thought his team should play next.

Darrynton Evans scored three touchdowns and 20th-ranked Appalachian State won its fourth straight Sun Belt championship overall with a 45-38 victory over Louisiana-Lafayette on Saturday. Evans was named the game's MVP for the second season in a row.

Zac Thomas threw for 149 yards and two touchdowns and Daetrich Harrington and Marcus Williams added touchdown runs. The Mountaineers racked up 416 yards on offense, including 267 on the ground — most of those in a dominating first half.

Drinkwitz set the goal of repeating as champions since taking over as head coach earlier this season after Scott Satterfield left for Louisville.

He kept a poker chip with him since late May, a symbol to remind his team of its goal this season. He pulled it out of his pocket after the game and thanked his players, saying “we asked then to keep the chip all year long and be motivated to do something that has never been done before. And this group did it. Impressive.”

Appalachian State defeated Lafayette 17-7 early this season on the road, but this one featured more offense.

The Mountaineers entered the game averaging 38.9 points per game and showed their firepower in the first half by scoring touchdowns on their first five possessions — the first three by Evans — to build a 35-14 lead.

Thomas got things going when he found Evans on a perfectly executed screen pass on third-and-15, resulting in a 58-yard touchdown less than two minutes into the game. After defensive tackle E.J. Scott forced and recovered a fumble at midfield on Lafayette's next possession, the Mountaineers cashed in with a 8-yard touchdown run by Evans. Then Thomas made it 21-0 when he connected with Evans in the flat for a 5-yard score.

“We just dug too deep of a hole,” Lafayette coach Billy Napier said. “It was 21-0 before you could look around.”

Thomas said it was important for App State to get a lead early.

“We knew they hadn’t won a game trailing, so that was our goal this week to start off fast and let them play from behind,” Thomas said. “We maintained the lead, so we pride ourselves on offense starting fast and getting points on the board. At the beginning we were 5-for-5 on touchdowns. We were just rolling, and no one could stop us at that point. Everything was working for us at that point, throwing, running it. It was just unbelievable to see that.”

Levi Lewis threw for a Sun Belt championship game-record 354 yards and four touchdowns for Lafayette (10-3, 8-2). But the left-hander turned the ball over twice, including an interception that returned 16 yards for a score by linebacker Josh Thomas in the third quarter that gave App State a 42-17 lead.

“We made a few too many mistakes to be a champion today," Napier said. “But for us to get back and make it a one-score game I’m proud of our players.”

The Mountaineers could eclipse a school record if they move up higher than No. 20 in the AP poll. Their current ranking tied a school record set earlier this season before they briefly fell out of the top 25 with their only loss to division rival Georgia Southern.

Lafayette: After limiting the Mountaineers to 17 points and keeping Evans in check in the first meeting, the Ragin' Cajuns didn't seem remotely prepared for what was coming this time around. Their defensive line got nearly no penetration on the QB, and when they did they were fooled by screen passes. Giving up five TDs on five possessions is never a good look, although they did keep App State in check in the second half.

Appalachian State: The Mountaineers looked like a well-oiled machine on offense with its big front controlling the line of scrimmage by blowing off the ball. Harrington ran for 89 yards, Williams had 78 and Evans 73 for App State. “Our offensive line was getting the second level, and that is something we were doing in the first game we played them,” Evans said.

Drinkwitz and Napier have been the subject of coaching rumors, and naturally both did their best to deflect attention.

“My family and I love it here and are very excited about what we’re doing at Appalachian State,” Drinkwitz said. "But at the same time I owe it to my family to see if it is something we are interested in. ... But I’m not in any hurry to leave.”

Napier said he loves coaching at Lafayette, but he didn't rule anything out, either, saying there is a lot of consider including quality of life, family and the people you work for.

Both teams will wait to hear where they're headed to play in bowl games on Sunday.