Frustrated Huskers holding up in 'broken, messed up year' 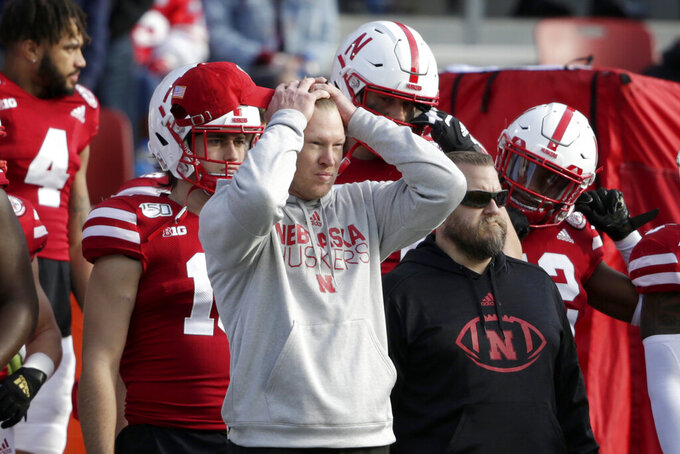 FILE - In this Nov. 16, 2019, file photo, Nebraska head coach Scott Frost holds his head during the closing seconds of an NCAA college football game against Wisconsin in Lincoln, Neb. Wisconsin won 37-21. The coach is frustrated, not just by the global pandemic that has disrupted life for everyone, but by associated factors that have kept the Huskers from playing. Some teams in the country already have played seven or even eight games.(AP Photo/Nati Harnik, File)

Nebraska coach Scott Frost let out a chuckle when he heard Northwestern coach Pat Fitzgerald told reporters the Cornhuskers would have a big advantage going into Saturday's game because they were coming off an open date.

“Maybe if this was week 7 or 8, having a week off would be nice,” Frost said Monday. “We’ve only played one game. Pat is one of the smartest guys in the country probably, but I don’t know if I agree with him on that one.”

That was about the only light moment during Frost's weekly videoconference with reporters. The coach is frustrated, not just by the global pandemic that has disrupted life for everyone, but by associated factors that have kept the Huskers from playing. Some teams in the country already have played seven or even eight games.

“I think we've had more practices with one game under our belt than any football team in the history of football,” Frost said.

What Frost called a “broken, messed up year” has seen the Big Ten originally decide not to play a fall football season and then reverse course and start in earnest Oct. 24.

The emergence of daily rapid COVID-19 testing and strict protocols for handling positive tests helped bring back football. Before that, Nebraska was among the teams that pushed hardest for a season, its tactics drawing scorn from some in the national media and suggestions that maybe Nebraska doesn't fit in the Big Ten.

Nebraska lost its opener at Ohio State by 35 points, then was notified four days later that Wisconsin would not play in Lincoln last Saturday because of a virus outbreak on the team. Wisconsin called off the game on its own volition, not because its positivity rate met the Big Ten threshold mandating cancellation. The game goes down as a no contest instead of a forfeit.

“I know they left a provision in there for teams to decide if it wasn’t safe in their community or university to play,” Frost said, “and that’s what our last opponent chose to do, so we’re on to the next one.”

The next one, Nebraska hoped, was to be a hurriedly arranged replacement home game against Chattanooga last Saturday. The Moccasins met virus testing standards, and Frost said he told his players the game would be played if the Big Ten approved.

“I don’t think they were very confident when they heard that,” Frost said, “and they were right. So we didn’t get to play.”

The Huskers practiced yet again on Saturday, Frost took his kids trick-or-treating, and then the team got together.

“We had a scary movie night on Halloween, trying to keep our guys from going to parties and doing some dumb things," he said.

Frost said his players have rolled with the punches and remain motivated.

“I think our kids have a little bit of a chip on their shoulder,” he said. "They see us fighting to try to get them to play. We’ve kind of failed at every turn. But they just want to be on the field. I think they feel like maybe some people are out to get them or have an ax to grind a little bit. They feel they haven’t accomplished everything they could have accomplished.”

Frost said he isn't worried about the ups and downs breaking his players' spirits.

“If we get two or three more games canceled, I don't know,” he said. “But I don’t think we have the type of guys who are going to throw up their hands and give up. They just want to play."