Helton confident at USC after supporter Swann resigns as AD 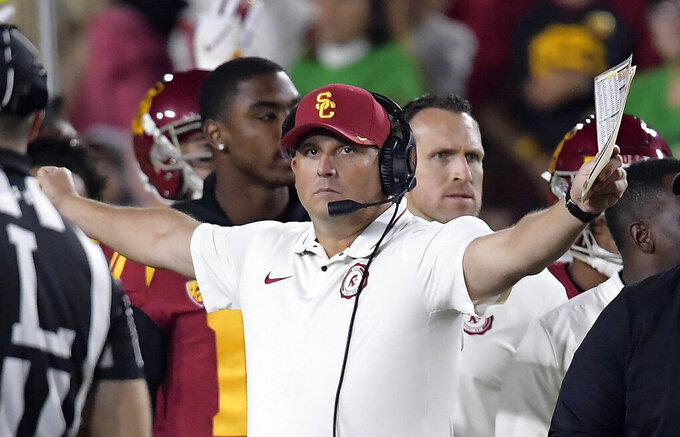 A day after Swann's abrupt departure, Helton was upbeat and unconcerned about his future.

And no, it's not because 18-year-old quarterback Kedon Slovis is protecting him now.

Helton said Tuesday night that he received messages of support from interim athletic director Dave Roberts and USC President Carol Folt in the wake of Swann's resignation two weeks into the football season.

"It's been really neat to feel that support," Helton said after the No. 24 Trojans (2-0, 1-0 Pac-12) practiced on campus ahead of their trip to BYU this weekend.

Folt assumed her job in July, and Swann's departure is the latest step in USC's overall realignment under new leadership. USC has endured several years of scandals around the athletic department and the university at large, but the football team has been largely scandal-free under the leadership of Helton, who is 34-17 with a Rose Bowl victory and a Pac-12 title in parts of five seasons.

After enduring months of speculation about his future last year when the Trojans finished with their first losing record since 2000, Helton was grateful for the immediate gestures of support from Folt and Roberts, USC's former director of compliance.

"She didn't have to do that, to take the time to reach out to me and say, 'Coach, man, love what you're doing,'" Helton said. "'The staff, the players, it was so fun to watch last Saturday, and I just want to help you in any way so your team can be successful.' And that meant a ton to me."

While the plan could change when Folt's search committee chooses a new permanent athletic director, the unlikely tenure of the folksy, twangy Helton atop the West Coast's glamour program is on steadier footing again.

Helton has already survived one change atop the USC athletic department during his decade at the school. He was promoted to head coach by previous athletic director Pat Haden, and Swann rewarded his inherited coach last year with a lucrative contract extension through 2023.

Swann made a passionate declaration of support for Helton shortly after the Trojans finished 5-7, and Helton rounded up another solid recruiting class while hiring Air Raid practitioner Graham Harrell as his new offensive coordinator.

The moves have worked so far. USC has beaten defending Mountain West champion Fresno State and perennial power Stanford in back-to-back weeks to open Helton's fourth full season in charge. The No. 24 Trojans did it despite losing starting quarterback J.T. Daniels to a season-ending knee injury after less than 30 minutes.

USC improved to 2-0 and returned to the AP Top 25 last weekend with a 45-20 victory over Stanford in which Slovis threw three touchdown passes and looked like a budding star.

Helton was the Trojans' offensive coordinator when Haden promoted him to head coach during the 2015 season after a series of alcohol-related misbehaviors by Steve Sarkisian. Helton won the Rose Bowl in his first full season in charge, and his Pac-12 championship one year later quieted many doubters who believed he was out of his depth.

But his critics returned last year when the Trojans lost five of their final six games — including losses to archrivals Notre Dame and UCLA — to finish with USC's fourth losing record since 1961.