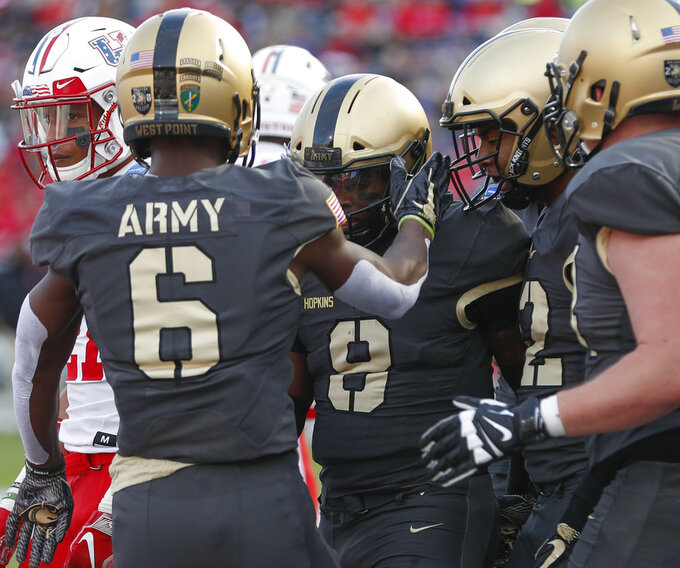 FORT WORTH, Texas (AP) — Army quarterback Kelvin Hopkins Jr. initially ran right before cutting back the other way and eluding a tackler. He sent two other defenders sliding to the ground when he switched directions again and took off toward the end zone.

That nifty 77-yard run was one of his Armed Forces Bowl-record five rushing touchdowns as the No. 22 Black Knights overwhelmed Houston 70-14 on Saturday to reach 11 wins for the first time in program history.

"Just trying to get back to the line of scrimmage," Hopkins said. "There was this huge convoy of guys right there when I was running in. ... I just felt like people were on me. I thought it was Houston, and I realized it was gray jerseys. It was a really good team win."

Houston (8-5) lost for the fourth time in five games since starting 7-1 and getting into the AP Top 25 poll for one week in late October. The injury-plagued Cougars suffered their most-lopsided loss in their 27 bowl games, and their biggest loss overall since a 66-10 loss at UCLA during the 1997 regular season.

"That's the hardest part to swallow, you're 7-1," second-year coach Major Applewhite said. "I'm proud of the way our kids fought. I'm not proud of losing the games at the end of the season the way we lost them."

Hopkins ran 11 times for 170 yards before coming out of the game midway through the third quarter when it was 49-7. He also completed the first 1,000-yard passing season for Army since 2007. He was 3-of-3 passing for 70 yards, including a 54-yarder that set up one of his three 1-yard TD plunges. He also had a 2-yard TD run.

On the first play of the second quarter, on Houston's first snap after Hopkins' long TD run, Cameron Jones had a 23-yard fumble return for a score after James Nachtigal forced the turnover when he sacked Clayton Tune.

While Hopkins had his left arm in a sling after the game, he said he was "a little banged up" and that it was just a precaution. The junior quarterback's 77-yarder on the last play of the first quarter made it 14-0.

"He did a really good job of finding an initial opening because it was almost a busted play," Monken said. "It was not designed to go back that direction and he kind of skipped out of the way of a guy."

Tune, the true freshman filling in for injured playmaker D'Eriq King, was 21-of-32 passing for 230 yards and was sacked 10 times. He was responsible for both Houston TDs, a 3-yard pass to Romello Brooker in the second quarter and a 6-yard run with 6 1/2 minutes left.

Houston: The Cougars didn't have King or NFL-bound defensive tackle Ed Oliver. King, who will be back next season, was responsible for 50 touchdowns in 11 games before knee surgery. Oliver missed four games because of a bruised right knee, then skipped the bowl game to focus on preparing for the NFL draft.

"I love Ed to death, but there were more issues than missing Ed," Applewhite said. "Give credit to Army."

Army: After a 10-loss season as freshmen, the Black Knights senior class won 29 games the past three seasons. They finished with back-to-back seasons of at least 10 wins. Army is an AP Top 25 team for the first time since 1996, the academy's only other 10-win season.

"I knew we had something special going on in our program," Monken said.