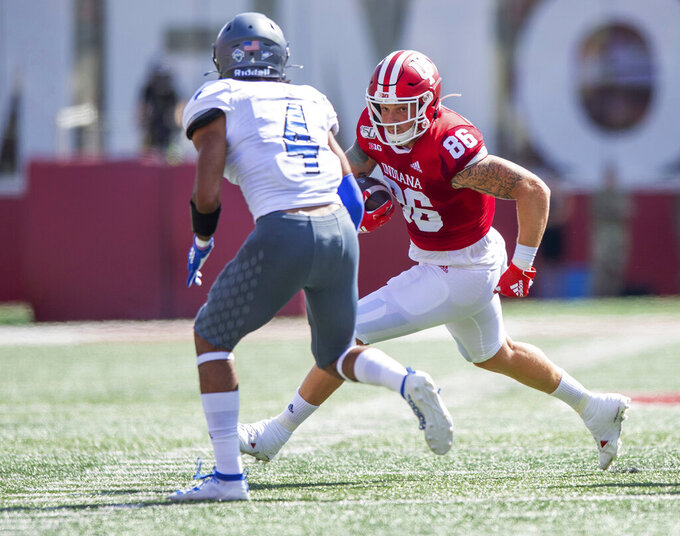 The redshirt freshman played clean, crisp, clean football in his second career start. His accuracy improved, the turnovers vanished and he was so efficient, Penix took a seat before halftime.

Now, he's searching for a favorite receiver — not easy with all the available options in the Hoosiers' revamped spread offense.

"It's great. Receivers love it," Penix said after Saturday's 52-0 rout over Eastern Illinois. "They always come to me, appreciate and love when they get the ball and I love throwing it to all of them, so they all work extremely hard in practice. Whoever is open, I tell them I'm going to get them the ball and I make sure that happens."

Through the first two games, Penix has been true to his word.

Thirteen players already have receptions, and the five touchdown passes have been split between five different guys.

There was little to quibble with Saturday, when Penix and Peyton Ramsey were a combined 27 of 34 with 423 yards, four touchdowns and no interceptions — connecting with 12 different receivers. Nick Westbrook, who led the Hoosiers in yards receiving (95) and TD catches (six) in 2016 didn't even catch a pass.

Instead, Donovan Hale recorded the first 100-game of his career and Whop Philyor was selected the Hoosiers' offensive player of the game with a four-catch, 75-yard performance.

"I thought he set the tone for us with that first third-down catch he made as well as just the tough hard-nosed run he had that I thought was just a good tone- setter," coach Tom Allen said at Monday's weekly news conference.

It wasn't just the receivers.

Indiana (2-0) ran the ball 34 times for 113 yards and three more touchdowns while the defense allowed only five first downs and 116 yards in total offense.

Nobody expects to see a replay when No. 6 Ohio State (2-0) comes to town this weekend.

The Hoosiers have a little bit of everything.

Westbrook, Hale and Miles Marshall are all big-bodied players who double as deep threats. Philyor and freshmen David Ellis and Sampson James are speedy athletes, capable of electrifying plays. Running back Ronnie Walker Jr. demonstrated his receiving skills with a nifty a 64-yard TD reception Saturday, and the Hoosiers have turned tight end Peyton Hendershot into a bigger weapon in the middle of the field.

"He (Hendershot) made some really good catches last week, took some hits," offensive coordinator Kalen DeBoer said. "This week he was in the right place and caught the ball first. After that he made some guys miss, ran through some tackles and had some third-down conversions."

So far, DeBoer's offense has worked perfectly against Ball State and Eastern Illinois.

Now comes the big test — Ohio State, a team the Hoosiers haven't beaten since 1988 — and Penix thinks he can pass by following the script.

"Mike doesn't have the one main guy. He thinks anybody can make a play for him," Hendershot said. "I just like us all getting the ball. It makes it easier."