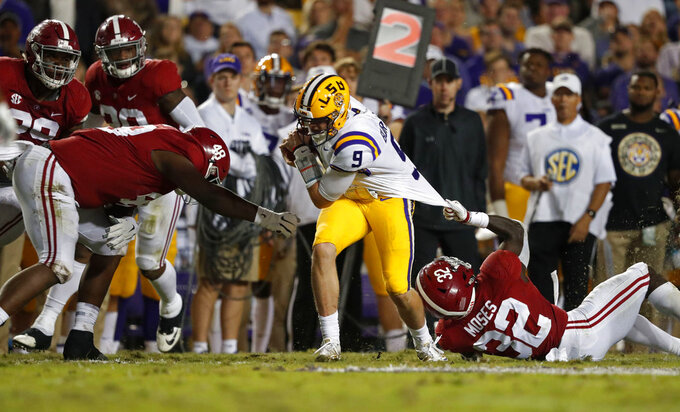 BATON ROUGE, La. (AP) — LSU coach Ed Orgeron proclaimed that Monday was his "biggest day" on the job since he took over the Les Miles in 2016.

The coach expressed concerned about the psyche of his players after the dual blow of losing big at home to No. 1 Alabama and then hearing their own coach say after the game that he needs to bring in better recruits.

"I told that to my coaches in a staff meeting this morning, 'We are the mature people. We have to bring the players up. I have to be at my best today,'" Orgeron said. "There are a lot of hurt people on our football team. We have the 24-hour rule. It may take a little longer to get over this loss."

Losses to Alabama tend to be emotional. The Crimson Tide has tormented the Tigers for generations — first for decades under coach Paul "Bear" Bryant and now under Nick Saban, a former LSU coach who has won five national championships with the Crimson Tide.

Alabama has won eight straight against the Tigers, starting with a victory in the national championship game at the end of the 2011 season, ruining what would have otherwise been the finest campaign in LSU history.

The latest loss to Alabama — by a score of 29-0 — ended LSU's hopes of reaching the Southeastern Conference championship game and dropped the Tigers from fourth to ninth in the AP Top 25 Poll .

Orgeron was critical of LSU's offensive and defensive linemen immediately after the game, saying essentially that they currently were not good enough to win crucial matchups at the line of scrimmage against Alabama.

On Monday, Orgeron backed off that assessment to some extent.

"We must coach better and that starts with me," Orgeron said. "We could've put guys in better position. Our schemes could have been better. We need to execute better. We must be better on the offensive and defensive lines. We must improve our depth and increase the number of quality players there."

No offensive or defensive lineman met with the media Monday. Linebacker Devin White indicated that he would not be bothered by criticism from a coach.

"When a coach criticizes me, I respect him," White said. "The coach is in a higher authority. He has been around the game. I take (criticism) as a building tool and embrace it.

"I will tell the coach, 'You say that I didn't do this good. Then, coach me better so I can do those things.' Football is a hard game. If a player is not all about getting better, then he shouldn't play the game."

The Tigers should find themselves in a prestigious New Year's Six Bowl game if they can close the regular season with three victories, starting Saturday at Arkansas.

"The first thing I am going to tell the players is block out the noise," Orgeron said. "I have a very good relationship with the players. We'll address some things and we'll be fine."

Under Orgeron, the Tigers have never lost back-to-back games. LSU has handily defeated Arkansas the week after a loss to Alabama each of the last two years. The Tigers beat the Razorbacks 38-10 in Fayetteville in 2016 and 33-10 in Baton Rouge in 2017.

"We're going to prepare the same way this week," Orgeron said. "We have to be mentally tough. We have a lot to play for. We know where we want to go and where we want to finish. We're 7-2 and have a chance at an excellent season. We see that as motivation."

LSU may be out of the running for a berth in the College Football Playoffs, but it still controls its destiny as regards getting a spot in a New Year's Six Bowl game. The Tigers should be among the top 11 Power Five conference teams when the CFP standings are announced Tuesday.

"If we win our next three games, we'll be 10-2," quarterback Joe Burrow said. "If I told you at the start of the season we'd be 10-2, you would have told me that I was crazy. We still have the potential to have a successful season."