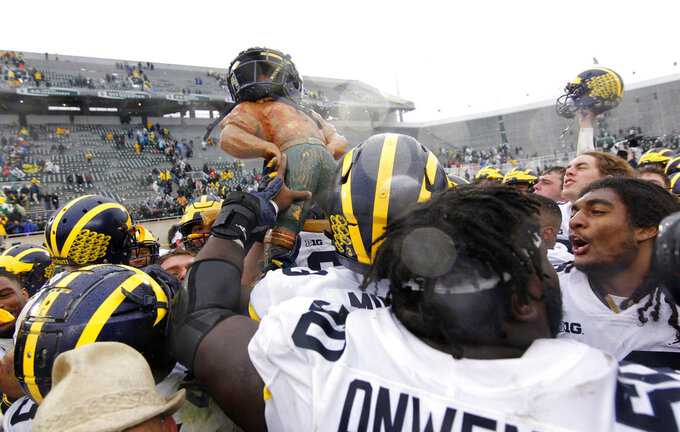 ANN ARBOR, Mich. (AP) — The pregame spat between Michigan and Michigan State is showing no signs of going away.

Michigan coach Jim Harbaugh said Monday the athletic directors for both schools should probably talk about what happened on Saturday before the game at Michigan State. The Spartans walked from one end zone to the other with their arms locked, as they do before each game, but it happened while some of the Wolverines were stretching near the middle of the field.

Contact was made , words were exchanged and Michigan went on to beat Michigan State 21-7 .

Harbaugh called it "bush league," after the game and clearly wanted to talk more about it two days later. He said the Spartans were on the field for their traditional walk later than scheduled and were led by the strength staff onto the field with coach Mark Dantonio just behind the sideline-to-sideline string of players.

"That had all the earmarkings and evidence of an orchestrated Stormtroopers march," Harbaugh said . He later confirmed in a text message he was referring to troops in the "Star Wars" film series.

Dantonio called the incident "B.S." after the game and addressed the situation again Sunday night.

"The whole thing to me was sort of juvenile," Dantonio said. "Things are going to happen in rivalry games, but I sort of stand by what I said."

Michigan State said Monday the two schools were communicating about the school's pregame ritual and said it has not been a problem in Dantonio's 12 years.

"The team was scheduled to arrive at Spartan Stadium at approximately 10 a.m. and walked the field at approximately 10:02 a.m." Michigan State spokesman Ben Phlegar said. "As a courtesy, Michigan was granted field access before MSU's arrival with the understanding from both sides that the U of M student-athletes would leave the field during this tradition. Michigan was on the field prior to 10 a.m. as previously agreed upon, but when multiple MSU staff members asked both U of M student-athletes and staff members to please move off the field for the pregame field walk, this did not occur."

"My preference is to keep that conversation and any further discussions between us," Manuel said. "I will work with our staff and the conference to see how this situation can be prevented from happening in the future. It is a great rivalry between two Michigan Universities, and the focus should remain on the game, the way it's played, and the final result."

"To call that unsportsmanlike or to call it bush league is putting it mildly," Harbaugh said. "That could've been a real, unfortunate incident. As I said, it's the opposite of B.S. Coach (Dantonio) said that was B.S. That's not B.S. That's fact. I think it's something now the two athletic directors really need to get together and talk about. I'll go one step further and use coach Dantonio's words back, 'It's not a product of the team, but their program.'"

Harbaugh appeared to be reading from a piece of paper on a lectern when he recalled Dantonio's quote about former Michigan linebacker Joe Bolden driving a stake into the middle of Michigan State's field. Michigan linebacker Devin Bush, one of the players involved in what Harbaugh called "shenanigans," dragged and kicked his cleats to rip up some of the grass under the Spartans' white logo at midfield following the pregame spat.

"I don't blame Devin," Harbaugh said. "I like the way our guys handled it."

While Dantonio may not want to add another day to the story on Tuesday during his weekly news conference, he might have a problem with staying silent on another topic. Harbaugh, unsolicited, offered a diagnosis of what he thinks might be wrong with Brian Lewerke.

Michigan State's quarterback was 5 of 25 for just 66 yards against the Wolverines after a shoulder injury kept him out of practice Monday through Thursday.

"He's throwing the ball like someone who has a torn labrum," said Harbaugh, a former quarterback at Michigan.

Harbaugh's words, actions and tweets have provided a distraction at times for his team's performance, which has not resulted in any sort of title during his first three years. This season, Michigan is the only Big Ten team without a conference loss.

The Wolverines (7-1, 5-0 Big Ten) have won seven straight since opening the season with a seven-point loss at Notre Dame. They have two weeks to prepare for their next game, a home matchup with No. 17 Penn State. After that, Michigan likely will be able to tune up against Rutgers and Indiana before closing the regular season at archrival Ohio State.

Harbaugh said his players are well aware of the opportunity in front of them.

"I think they have been embracing it for months now," he said. "Hard work is paying off. They see themselves getting better, playing well, striving for the best they can possibly be."