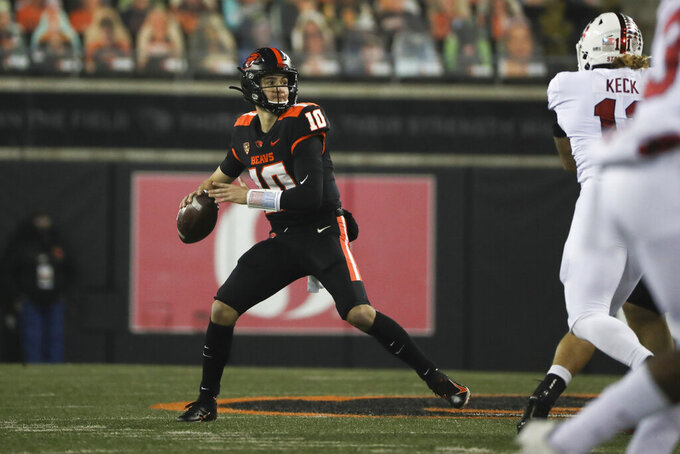 Oregon State quarterback Chance Nolan (10) looks for a receiver during the first half of the team's NCAA college football game against Stanford in Corvallis, Ore., Saturday, Dec. 12, 2020. (AP Photo/Amanda Loman)

CORVALLIS, Ore. (AP) — Davis Mills passed for 292 yards and a touchdown, and ran for two scores to lead Stanford to a 27-24 victory over Oregon State on Saturday night.

Mills completed 21 of 29 passes and did not commit a turnover.

Austin Jones added 126 yards rushing for the Cardinal (3-2), who have been in road-warrior mentality the past three weeks.

Jet Toner’s 39-yard field goal with 1:48 remaining broke a 24-24 tie and the Cardinal defense forced a turnover to seal the victory.

“For this team to come back, being on the road these last few weeks,” Stanford coach David Shaw said. “And be on a three-game winning streak, facing all kinds of odds.”

Shaw added that Stanford’s “calling card is effort, and even when we don’t play perfectly, we’re going to fight you to the end.”

The Beavers (2-4) were in position to tie or win the game on their final possession, but quarterback Chance Nolan fumbled after an 11-yard run and Stanford inside linebacker Curtis Robinson recovered at the Cardinal’s 16-yard line with 23 seconds remaining. Inside linebacker Gabe Reid forced the fumble.

The play was reviewed and confirmed.

“That just goes back to day one of camp and us emphasizing how important it is to play our fundamentals and get the ball out,” Robinson said.

Nolan said he wasn’t sure if his knee hit the ground before the fumble.

“That’s football, man,” Nolan said. “You’ve got to leave no doubt in that situation.”

Despite the game-deciding turnover, Nolan performed well in his second career start in place of injured starter Tristan Gebbia, who had season-ending surgery on his hamstring this week. Nolan completed 17 of 30 for 221 yards and three touchdowns, and ran for 50 yards.

“I think he made a huge jump,” Oregon State coach Jonathan Smith said. “You could just feel his comfort level grow.”

Oregon State drove to the Stanford 3-yard line on their ensuing possession and the offense remained on the field on fourth-and-2, but following a delay of game penalty on the Beavers, Everett Hayes kicked a 26-yard field goal to tie the game at the 7:18 mark.

The Beavers received a boost from wide receiver Tre’Shaun Harrison, who was eligible to play for the first time Saturday and responded with five catches for 91 yards.

Harrison’s 61-yard catch early in the second quarter set up Nolan’s 8-yard touchdown pass to Zeriah Beason and a 14-6 lead.

Oregon State running back Jermar Jefferson returned after missing last week’s game at Utah due to COVID-19 testing and contact tracing protocols. The nation’s third-leading rusher managed 80 yards on 18 carries before limping off the field early in the fourth quarter. He came into the Stanford game averaging 168.8 yards per game.

On the opening possession of the third quarter, Mills hit Simi Fehoko on a 47-yard flea flicker to the 1, and Mills scored on the next play giving Stanford its first lead at 16-14.

Oregon State answered with a 75-yard scoring drive culminated by a 30-yard touchdown pass to Tyjon Lindsey, putting the Beavers back on top 21-16 midway through the third quarter.

Stanford spent the entire week practicing in Corvallis due to the Santa Clara Public Health Department’s new emergency directive Nov. 28 that prohibited training and competition for the Cardinal in the county.

Stanford: Playing on the road has not been an issue season for Stanford, which had just one home game this season due to COVID-19 related issues.

Stanford played without receivers Michael Wilson and Connor Wedington, who were hurt in the Washington game last week and will miss the remainder of the season.