Missouri, Kentucky have the spotlight as lone SEC matchup 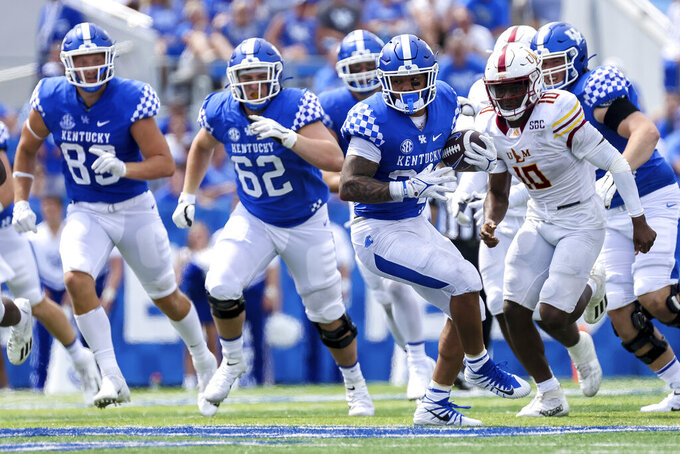 Kentucky running back Chris Rodriguez Jr. (24) runs the ball up the field during the second half of an NCAA college football game against Louisiana-Monroe in Lexington, Ky., Saturday, Sept. 4, 2021. (AP Photo/Michael Clubb)

Here are things to watch in the Southeastern Conference in Week 2:

Missouri (1-0) visits Kentucky (1-0). An early SEC East lead is at stake for the schools, which were picked to finish third and fourth respectively in a preseason media poll. The host Wildcats are coming off a 45-10 rout of Louisiana Monroe in which their new pro set offense totaled 564 yards with new quarterback Will Levis (367 yards, four touchdowns) at the helm. Missouri survived Central Michigan 34-24 in its opener and looks for a second consecutive win over Kentucky. Other notable games matching SEC schools against the Atlantic Coast Conference continue with Tennessee (1-0) hosting Pittsburgh and Mississippi State (1-0) hosting North Carolina State (1-0). The SEC went 3-0 against the ACC last week.

Pittsburgh and Tennessee defenses. The units won't be on the field together, but they rank 13th and 14th respectively in total defense, with the Panthers allowing 10 fewer yards (209.0) per game than the Volunteers. Tennessee faces an additional task of slowing Pitt's fifth-ranked offense that’s averaging 598 yards per game after shellacking UMass 51-7 last week. Panthers quarterback Kenny Pickett ranks third in ACC total offense at 311 yards per game and directs a unit that ran 86 plays last week to lead the league. The Volunteers also like to play it fast, running 94 snaps in their 38-7 opening-game win over Bowling Green.

Kentucky held Louisiana Monroe to just 87 yards in its 45-10 victory and leads the nation in total defense. Half of those yards came on ULM’s opening drive following an interception that set up the game’s first touchdown. The Wildcats clamped down after that, allowing only a fourth-quarter field goal and holding the Warhawks to minus-1 yard in its only other possession inside Kentucky territory.

Vanderbilt visits Colorado State in the inaugural meeting as “just” a seven-point underdog. But the Commodores have their work cut for them after managing just 321 yards in a 23-3 opening game loss to in-state East Tennessee State. The Rams fell 42-23 to San Diego but gained 462 yards and look to bounce back at home.

Texas A&M junior receiver Ainias Smith contributed multiple ways in the No. 5 Aggies’ 41-10 win against Kent State. He caught a career-best eight passes for 100 yards and two touchdowns and totaled 127 all-purpose yards, his third-highest output after gaining 152 at Alabama and 130 against North Carolina last season.