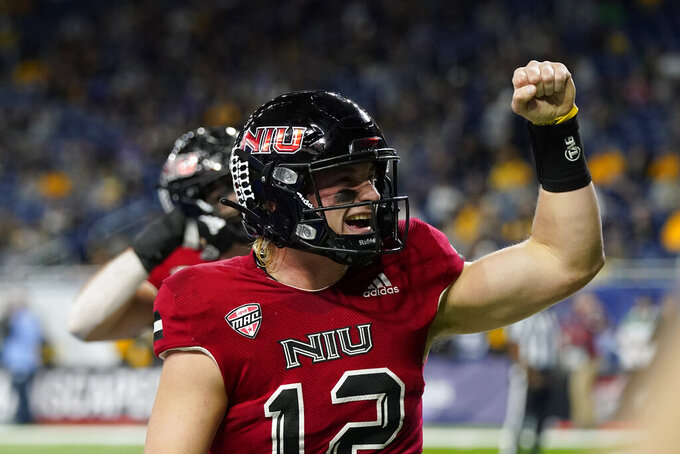 Northern Illinois quarterback Rocky Lombardi reacts towards the fans after scoring on a 1-yard run during the first half of an NCAA college football game against Kent State, Saturday, Dec. 4, 2021, in Detroit. (AP Photo/Carlos Osorio) 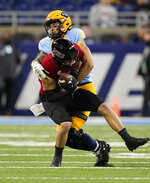 DETROIT (AP) — Quarterback Rocky Lombardi ran for three touchdowns and Jay Ducker ran for 146 yards on 29 carries to power Northern Illinois to a 41-23 victory over Kent State in the Mid-American Conference title game on Saturday.

It is the Huskies’ (9-4) sixth MAC title in the last 11 years and first since 2018 when it beat Buffalo. Kent State (7-6) was shooting for its first conference championship since winning it in 1972.

“This is historic,” said Huskies coach Thomas Hammock whose team was predicted to finish in last place this year after going 0-6 in 2020. “I don’t think any team has gone winless the year before and won a championship.

“When everybody said we would finish last, all I told our team was we are the best team in the MAC until proven otherwise. Obviously, they didn’t prove us otherwise.”

Momentum appeared to be shifting to the Golden Flashes at the start of the second half. Andrew Glass kicked a 41-yard field goal on the opening drive for their first points of the game and the Kent State defense forced Northern Illinois to punt for the first time.

But on the next drive Dustin Crum, the MAC’s most valuable player this season, was intercepted by C.J. Brown who returned it 26 yards for a touchdown as the Huskies went ahead 24-3.

“I saw it tipped and I went up and had to make a play,” said Brown who was named the defensive player of the game. “I felt like that was a game-changing play when we needed it.”

The Golden Flashes cut the deficit to 24-10 with 27 seconds left in the third quarter when Crum hit Nykeim Johnson on a 17-yard scoring strike.

Kent State’s Collin Schlee ran four yards for a touchdown and also threw a 7-yard TD pass to Luke Floriea as time expired to close out the scoring.

Northern Illinois held Crum to 27 yards passing in the first half while building a 17-0 lead.

After John Richardson kicked a 27-yard field goal to close the first drive, Clint Ratkovich capped a 10-play, 78-yard march with a 2-yard TD run to push the Huskies ahead 10-0 with 2:09 left in the first quarter.

Following a leaping interception by Northern Illinois linebacker Dillon Thomas on Kent State’s next drive, Lombardi drove the Huskies 81 yards and extended their advantage to 17-0 when he bulled over the goal line from the 1 with 8:33 remaining.

“To become the MAC champions means the world,” said Ducker who was named the offensive player of the game. “We set a goal at the beginning of the year to win the MAC championship and we got it today.”

The Golden Flashes and Huskies will need to wait until Sunday to find out their bowl destinations. The MAC has eight teams bowl eligible but the conference champion does not automatically qualify for a specific bowl.

Prior to the start of the game, a moment of silence was observed in memory of the killing of four students earlier this week at Oxford High School, located about 30 miles north of Detroit. Black ribbons were tied to each goal post in support of the school and community, and students from Oxford High School were hosted at the game and recognized during the first half.

After going 0-6 in 2020, Northern Illinois completed a worst-to-first season with a roster comprised of 75 players who finished high school in 2020 or 2021. According to a Northern Illinois sports information spokesperson, the Huskies had the second-youngest roster among 130 FBS team this year. Only Navy’s roster was younger with 99 players from classes in the same years.