No. 1 Georgia will try to get ground game going at Missouri 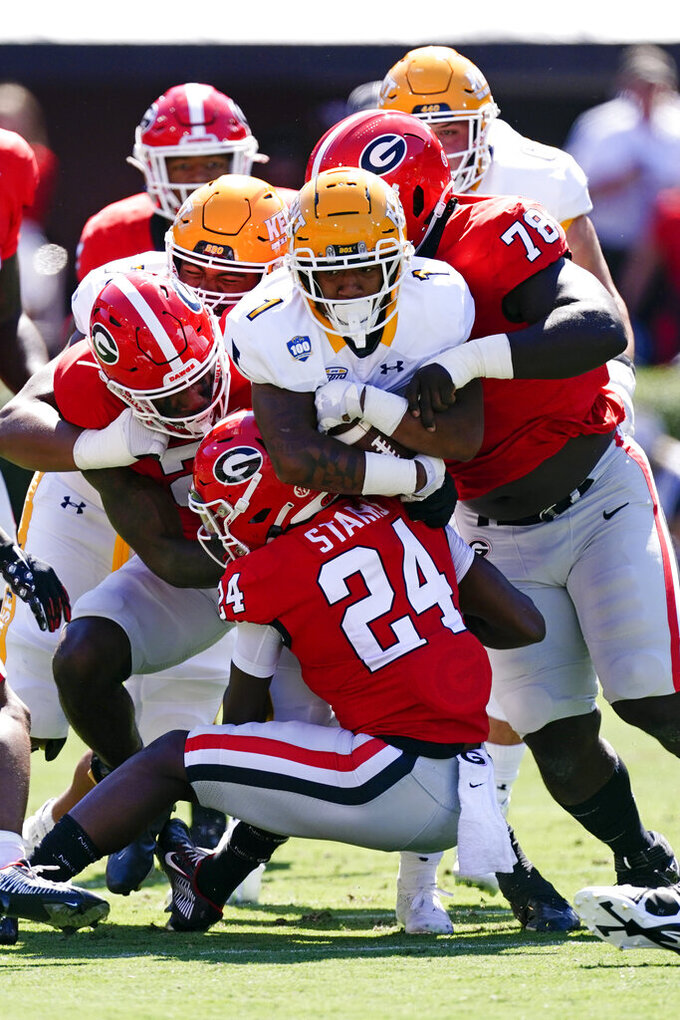 KANSAS CITY, Mo. (AP) — Georgia has one of college football's prolific offenses, triggered by one of its best quarterbacks, so of course the topic of conversation around Athens as the top-ranked Bulldogs head to Missouri on Saturday would be their run game.

That's what happens when something — anything — doesn't meet their expectations.

Lofty as they may be.

Georgia ran 41 times for 257 yards in a less-than-impressive 37-22 win over Kent State last weekend, but that total was inflated by a 75-yard run by Brock Bowers. Take it away and the Bulldogs (4-0, 1-0 SEC) averaged just over 4.5 yards per carry against a low-level Mid-American Conference opponent playing between the hedges.

“We certainly could be much more explosive in the run game and improve in that area,” Georgia coach Kirby Smart said, "but, you know, when you have the number of explosive plays we’ve had on the year, you have to weigh whether that’s a run, a pass, a screen — who are you and who is your identity? And I think that’s starting to play itself out a little bit.

The ineffectiveness of the Georgia run game — again, relatively speaking — has been a particular problem in the red zone, where the Bulldogs have settled for eight field goals, taking some of the shine off their 25-for-26 conversion rate.

“When the field tightens up and shrinks, that’s where the run game is more glaring because the boxes are tighter,” Smart explained. “They’re tighter to the box. There are less people in parts of the field, and they are in your front yard. You have to block them and run through them. Some of them are just misses.”

The Tigers (2-2, 0-1), who are coming off a heart-breaking loss at Auburn, can at least point to their run defense as a positive from their trip to the Plains. They allowed 11 yards rushing over the last three quarters and overtime, an impressive number for a rebuilt defense that was among the worst against the run in college football last year.

The biggest reason for the turnabout is transfer linebacker Ty'Ron Hopper, who has led the Tigers in tackles three of their first four games. Hopper had three tackles for loss and a sack against Auburn.

“It’s definitely a blessing knowing that those guys (Hopper and Chad Bailey) will take care of everything we don’t pick up on,” Tigers defensive tackle Kristian Williams said. “They display that throughout practice.”

They'll have to display it on Saturday for the Tigers to have any hope of springing an upset.

The Bulldogs have some of the best wide receivers in the SEC, but the Tigers have the most productive. And it isn't star freshman Luther Burden III. Dominic Lovett has 21 catches for a league-best 376 yards, an average of nearly 18 per catch. The sophomore had only 26 catches for 173 yards last season.

“I felt like I tried to do too much too soon” with Lovett last season, Tigers coach Eli Drinkwitz said. “You got to trust the process. There is a process to be great. Just because you have the ability doesn’t mean it just is going to happen overnight.”

Missouri right tackle Zeke Powell will miss the rest of the season after getting hurt trying to tackle an Auburn player following an interception. Burden is questionable after also getting hurt against Auburn, where he tried to finish the game. Bailey is likewise questionable after he watched the end of the overtime loss with his arm in a sling.

Georgia quarterback Stetson Bennett already triggers the third-best pass offense in the SEC at 350.5 yard per game, and now he could have reinforcements on the way. Wide receivers Arian Smith and AD Mitchell could play against the Tigers after missing the win over Kent State with injuries.

You can bet Tigers running back Nathaniel Peat, their leading rusher with 258 yards and a touchdown, will be looking for retribution Saturday. He was headed for the winning touchdown against Auburn in overtime when he reached for the pylon with the ball. It slipped from his hands and the fumble wound up costing the Tigers the game.

The same goes for kicker Harrison Mevis, whose chip-shot miss kept Missouri from winning it in regulation.

The Tigers know they have to stick around into the second half to have any chance of winning. The Bulldogs have outscored opponents 106-16 in the first half of games on their way to averaging 42.2 points per game.

“Todd Monken, their offensive coordinator, was a tremendous head football coach,” Drinkwitz said. “He’s got a really big tool box. And then, obviously, he’s got some really talented players. His biggest challenge will be keeping everybody happy.”