No. 12 UCLA looks to remain in Pac-12 hunt against Stanford 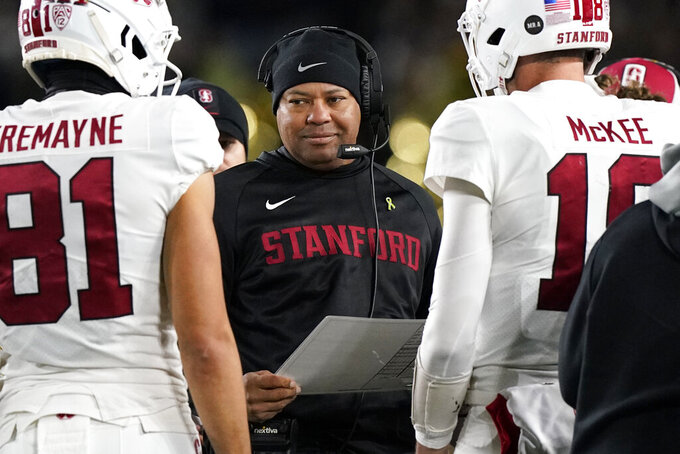 LOS ANGELES (AP) — UCLA and Stanford are in unaccustomed spots going into Saturday’s matchup at the Rose Bowl.

Chip Kelly’s message after the Oregon loss has been about making sure it doesn’t linger.

“You play 12 games, you only get 12 opportunities, and you can’t let one game equal two games,” he said. “What I mean by that is if you get beat once, you can’t let that team beat you again. I think sometimes your attitude is feeling sorry for yourself, but we don’t get that around here.”

The Ducks lead the conference with a 4-0 mark but UCLA, No. 10 USC and No. 14 Utah have only one loss. The Bruins can control their fate with a win over the Utes before they host the Trojans on Nov. 19.

Even though the Pac-12 would need some help to get a team into the College Football Playoff, a conference title would at least assure UCLA of its first Rose Bowl appearance since 1999. Quarterback Dorian Thompson-Robinson said a lot remains on the table other than just competing for a conference championship.

“We have way bigger goals than that, and I think we can still accomplish those if we just do our jobs on a weekly basis,” he said. “But I think, right now, our main focus is trying to go 1-0 against Stanford and beating them.”

The Cardinal (3-4, 1-4) have won two straight as they look to avoid back-to-back losing seasons for the first time since 2007. They snapped a 10-game conference losing streak with a 15-14 win over Arizona State last week. It was the first time since 1980 that Stanford had won a game without scoring a touchdown.

A total of four points has decided Stanford’s last three games. It lost 28-27 to Oregon State before wins against Notre Dame (16-14) and the Sun Devils.

“I think we’re a better football team right now, even though we’re lacking in a couple of places. A couple of starters not being with us,” coach David Shaw said. “I think as an entire team, we’re playing better against the run. Offensively, we found our groove a couple of different ways.”

UCLA has won two of the last three meetings in the series, but those have occurred at Stanford Stadium. The Bruins have a six-game losing streak when facing the Cardinal at the Rose Bowl, with the last win coming in 2008.

The last time the home team was victorious was in 2017, when Stanford was in the midst of an 11-game winning streak in the series.

In both Pasadena meetings under Kelly, the Bruins have scored at least 42 points only to fall short.

Stanford will be missing running back Casey Filkins for the rest of the season after he suffered an arm injury last week. Filkins was leading the conference in total touches with 139. The Cardinal also lost E.J. Smith earlier in the season.

Michael Wilson, who leads the team with 418 receiving yards, is also likely out for the year after an injury against Notre Dame.

The injuries to the skill position players has put even more pressure on quarterback Tanner McKee. The junior set a career high with 57 attempts last week and threw for 320 yards, the second-most in his career.

Thompson-Robinson is second among Power Five quarterbacks in completion percentage (73.8%) and has thrown multiple TD passes in five straight games, the longest such streak of his career. His favorite target has been wide receiver Jake Bobo, who has caught a score in three consecutive games.

Running back Zach Charbonnet leads the Pac-12 with 766 yards and has four straight 100-yard games.

NEED TO GET DEFENSIVE

If it wants to avoid an upset, UCLA’s defense will need to improve in some critical areas. The last three opponents have been 21 of 40 on third-down conversions, while Utah and Oregon combined for 454 rushing yards.