No. 13 Indiana chases another goal against No. 23 Michigan 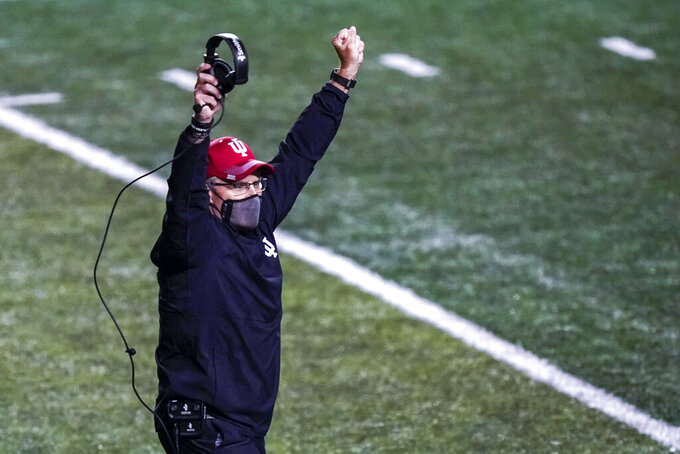 There's plenty on the line in Week 3. Coming off a loss to the rival Spartans last week, Michigan needs a win to stay in the Big Ten East hunt. Indiana, meanwhile, will try to protect its highest ranking since October 1987. If the Hoosiers snap a 24-game losing streak in the series, they'd remain atop the division and crack the top-10 for the first time since 1969. It's only the fourth meeting with both in the Top 25.

Michigan QB Joe Milton vs. Indiana's secondary. At 6-foot-5, 243 pounds, Milton is an imposing figure in the pocket. He completes nearly 65% of his passes and has thrown for 525 yards and one touchdown. He's also rushed for 111 yards and a score. Now the Hoosiers vastly improved defense faces a challenge that has proved problematic previously — containing a mobile quarterback. It should be a good test for Indiana.

Michigan: RB Hassan Haskins. Wolverine coaches continue to insist they will rotate the backs throughout the game, though they've acknowledged they may go with the hot hand. So far, that's been Haskins who has 14 carries for 138 yards and three scores. If he can help alleviate the burden on Milton, it would be helpful.

Indiana: CB Tiawan Mullen. The sophomore is off to a fast start, and he wreaked havoc on Rutgers last week by making six tackles and recording 2 1/2 sacks. Through two games, he has 15 tackles and 3 1/2 tackles for loss and he's a big reason the Hoosiers' defense has forced six turnovers this season.

Two of the last three matchups were decided in overtime. ... Michigan has not lost to the Hoosiers since 1987, the first time they met with Indiana being the higher ranked team. ... Indiana is 2-0 in league play for the first time since 1991. It has won three straight conference games and seven of its last nine. ... The Wolverines are 19-1 all-time at Memorial Stadium. ... Indiana has at least one takeaway in 31 of the last 33 games while Michigan has not turned the ball over this season. ... Mike Hart, Michigan's career rushing leader, and former quarterback Nick Sheridan are both assistant coaches on Indiana's coaching staff.