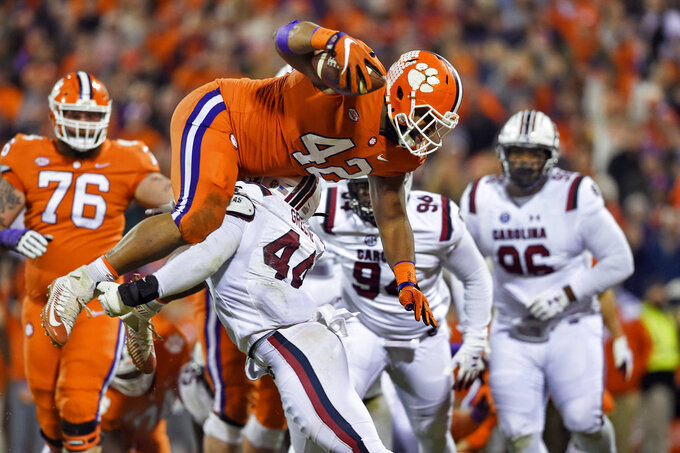 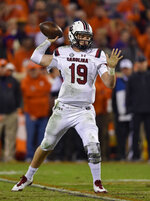 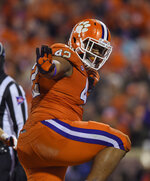 The Tigers had relied on their strong, consistent defense to take charge in game after game this season. When things broke down in a big way against rival South Carolina, Clemson's offense took charge in a 56-35 victory to finish a 12-0 regular season Saturday night.

Trevor Lawrence threw for a career-high 393 yards and Clemson finished with 744 yards when its defense gave up 600 yards and five passing TDs to the rival Gamecocks (6-5).

"There's no doubt the defense has helped us plenty of times," co-offensive coordinator Jeff Scott said. "When you play a long season, play a lot of games, we knew there was going to be an opportunity to lean on us a little bit."

The Tigers got rolling early with touchdowns on their first four possessions on the way to reaching 12-0 for the second time in four seasons and for the third time in program history, starting with its 1981 national title season.

Clemson (CFP No. 2) kept pace for another title run with its latest success over the Gamecocks (6-5), its longest since winning seven in a row from 1934-40.

"It was good to get five in a row and hopefully make six in a row next year," Clemson receiver Hunter Renfrow said.

Bentley said the lofty numbers don't mean much to him after the loss. "Maybe in 30 years from now I'll look back and appreciate it more, but right now really the only thing I can think about is we lost," Bentley said.

Not that South Carolina didn't throw a scare into the Tigers — or give defensive coordinator Brent Venables something to yell about leading into the ACC title game.

South Carolina, which had lost the last two rivalry games by a combined 90-17 score, was supposed to have little chance to hang with Clemson.

But it was the Gamecocks who struck first and kept on going. Bentley threw for 302 yards and three TDs in the opening half, including scoring throws of 67 yards to Kiel Pollard and 75 yards to Deebo Samuel to stick within 28-21 at the break.

Clemson's offense was relentless early on with four touchdowns on its first four possessions, two rushing scores by Choice and another on a 1-yard leap into the end zone by 315-pound Christian Wilkins.

Wilkins came up flexing in celebration, then struck the Heisman pose — which drew a 15-yard unsportsmanlike conduct penalty and ire of coach Dabo Swinney who got in Wilkins face for a minute or two on the sidelines.

Swinney told his senior defensive tackle he'd never run the football again if he pulls ever pulls a similar stunt.

If former Clemson quarterback Deshaun Watson "didn't win the Heisman, Christian is not going to win it," Swinney said.

It was far from the only bit of bravado by the Tigers. After Lawrence's 22-yard TD pass to Tee Higgins to put Clemson ahead for the first time 14-7, the freshman quarterback stared down the South Carolina sideline. But that's common in a heated rivalry where some in the home crowd booed the Gamecocks' band at halftime.

Choice had scoring runs of 1, 2 and 13 yards. His last one gave Clemson 41 rushing TDs this season to set the program single-year mark.

Travis Etienne ran for 150 yards and two touchdowns (the last with 39 seconds left) to give him 19 to set that single-season record.

Samuel had 10 catches for 210 yards and three touchdowns while Gamecocks receiver Shi Smith had nine grabs for 109 yards and a score.

The teams played offense like they were in the Big 12 combining for 1,344 yards.

South Carolina: The Gamecocks were down three starters on the defensive line and had little hope of putting pressure on Clemson's offense. They'll need to find some healthy bodies quick with a hurricane-canceled makeup game with Akron ahead next week.

Clemson: The Tigers hadn't allowed more than 16 points in any of their past six games. Yet, South Carolina put up the most points in a game against them this season. Clemson will have to shore up the secondary if it hopes to slow down Alabama and quarterback Tua Tagovailoa should it get the chance in the playoffs.

Clemson defensive coordinator Brent Venables said he'd unloaded on his players a couple of times already about their poor performance. The Tigers hadn't allowed more than 26 points to any team this year before South Carolina. It had given up a total of 49 points its previous six games. "I'm embarrassed," Venables said.

Clemson didn't give up a sack against the Gamecocks and have now just allowed one quarterback takedown in its past five games.

South Carolina plays Akron at home next Saturday as a makeup game for one cancelled in September due to Hurricane Florence.

Clemson faces No. 24 Pitt in the ACC Championship game in Charlotte, North Carolina.