No. 2 Oklahoma hosts Tulane in game moved for Hurricane Ida 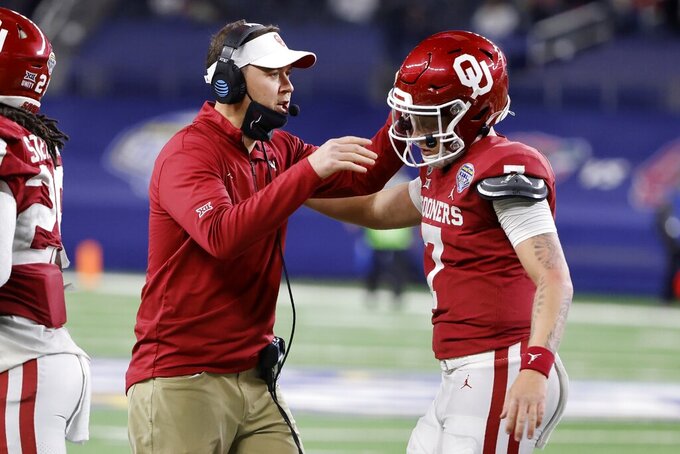 FILE - In this Dec. 30, 2020, file photo, Oklahoma coach Lincoln Riley, left, celebrates with quarterback Spencer Rattler after Rattler ran for a touchdown against Florida during the Cotton Bowl NCAA college football game in Arlington, Texas. Riley understands why there’s so much buzz surrounding his second-ranked Sooners. He just doesn’t care. Oklahoma’s high-powered offense returns Rattler and plenty of other talent from a 9-2 squad. That’s why the Sooners have the program’s highest preseason ranking since 2011. Now, it’s time to play. Oklahoma hosts Tulane on Saturday in a season-opening contest that was moved from New Orleans because of Hurricane Ida. (AP Photo/Michael Ainsworth, File)

NORMAN, Okla. (AP) — Oklahoma coach Lincoln Riley understands why there is so much buzz surrounding his second-ranked Sooners.

“Whatever they say in preseason, we all know it’s a bunch of garbage,” he said. “It doesn’t matter until we can stop reading and talking and actually play. Go look at preseason rankings through the years and then go look at postseason. It’s just a guess.”

It's actually an educated guess. Oklahoma’s high-powered offense returns preseason All-America quarterback Spencer Rattler and plenty of other talent from a 9-2 squad that beat Florida in the Cotton Bowl. That’s why the Sooners have the program’s highest preseason ranking since 2011.

Oklahoma gets its first test when the Sooners host Tulane on Saturday in a season-opening contest that was moved from New Orleans because of Hurricane Ida.

Riley said his team is ready.

“I like the way we’ve prepared,” he said. “I feel like we’re ready to play, we’re ready to go play somebody else, ready to see what this young team is going to look like early in the season, how young guys are going to come along, the chemistry, adapting to all that’s new... It’s all been a bunch of challenges for us. We’ll get a good litmus test Saturday about where we’re at.”

Tulane has had plenty to think about besides football. The athletic department has moved its headquarters to Birmingham, Alabama, while things are getting repaired back home.

“We’ve all got family, friends, fellow students, student athletes that are there and we have a lot of people that lost their homes,” Tulane coach Willie Fritz said. “We got guys on our team that weren’t able to hear from their people back home for a few days since cell service wasn’t functioning in New Orleans. It sounds like everyone is doing OK as far as our team and their families are concerned.”

Tulane will retain all net proceeds from ticket sales. The programs have agreed to find a date for the Sooners to play Tulane in New Orleans.

Riley said he’s glad the Sooners can host the game, and he’s impressed with how quickly the shift in venues happened.

“Give credit to both administrations for doing a lot of work in a short amount of time,” he said. “Me being on this side of it, you don’t really realize all it takes to put together a football game. To host this many people on short notice when you didn’t expect the game to be here is a huge undertaking.”

Riley said he was surprised when running back Tre Bradford, who had transferred in from LSU, decided to leave the program and re-enter the transfer portal.

Riley said there’s enough talent left to handle the issue. Kennedy Brooks is back after sitting out last season with COVID-19 concerns. He has rushed for 2,067 yards and 18 touchdowns in his Oklahoma career. Eric Gray, a transfer from Tennessee, gained 1,026 yards from scrimmage last year. Riley said he expects the workload to be similar to when Samaje Perine and Joe Mixon split time in the Oklahoma backfield.

Tulane quarterback Michael Pratt passed for 1,806 yards and 20 touchdowns and ran for 229 yards last season as a freshman.

He has Oklahoma's attention.

“As you watch it, you see a guy that can extend plays, hurt you with his feet,” Oklahoma defensive coordinator Alex Grinch said. “You know, that’s kind of the typical quarterback that maybe used to be unique that you kind of expect to see now week in, week out. They use some of the RPO game as well. Their numbers are good from a year ago.”

Fritz enters his 29th season as a college head coach with a career record of 222-107-1. Last season, the Green Wave went 6-5 before losing to Nevada in the Idaho Potato Bowl. Three of the losses were by six or fewer points, and one was in double overtime.

“He’s been a constant of high-level football,” Riley said. “A lot of respect for those guys. They had a really strong season last year. Were agonizingly close to winning several more. Some really good players coming back. It’ll be a fun challenge for our opener.”

Tulane receiver Mykel Jones started his college career at Oklahoma. He won’t be able to play against his former team because of a torn ACL.

“He’s a very mature young man and it’s just unfortunate, but he’ll bounce back,” Fritz said. “He’s going to work a little bit in our athletic department and he’s looking to become an agent. We’ve hooked him up with some people and a few internships and I know he will do well.”