No. 9 Notre Dame travels to Florida State for season opener 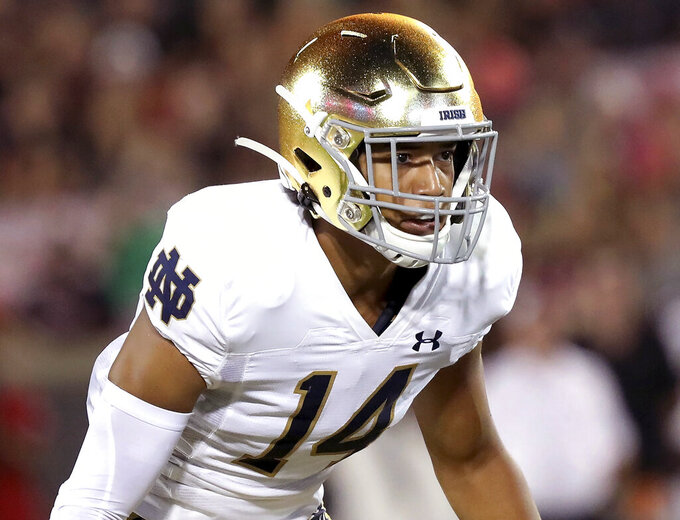 Line: Notre Dame by 7 ½, according to FanDuel Sportsbook.

The Fighting Irish look to show they have found a transfer quarterback — Jack Coan from Wisconsin — and a cohesive offensive line that can lead the team back to the College Football Playoff in a year when Notre Dame returns to being an independent. In year two for Mike Norvell at Florida State, there are pressing questions on both sides of the ball and the Seminoles are seeking confidence in September — as well as perhaps an upset to spark the rebuild.

Notre Dame's run vs. FSU's run defense. Kyren Williams is a first-team AP All-American as an all-purpose back following a freshman season in which he ran for 1,125 yards and 13 touchdowns along with 35 receptions for 313 yards and a touchdown. Williams leads a ground attack that also features Chris Tyree (73 rushes, 496 yards, four TDs) and C’Bo Flemister (58 carries, 299 yards, five TDs). The Seminoles brought in a group of three transfer defensive ends to shore up a rush defense that was 97th against the run last fall allowing on average 199 yards per game.

Florida State: RB Jashaun Corbin ran 81 times for 401 yards and five touchdowns in 2020, but Corbin wasn’t yet confident as he was recovering from a torn hamstring suffered in Sept. 2019 while he was playing for Texas A&M. Corbin has been more physical and consistent in camp and is clearly the Seminoles’ top tailback.

Notre Dame: S Kyle Hamilton is a preseason AP All-American who has started in 24 games over two years at Notre Dame. In 2020, Hamilton led the Fighting Irish with 63 tackles, including 51 solo. He had a career-best 10 tackles in the ACC championship game loss to Clemson.

Florida State QB McKenzie Milton could be making his return to the field following a gruesome 2018 leg injury at UCF. Milton threw for 8,683 yards, 72 touchdowns and 22 interceptions from 2016-18 with the Knights, and he is listed as a co-starter on Florida State’s depth chart along with Jordan Travis … Notre Dame is 33-5 (.868) in the last three seasons. Florida State is 14-20 (.411) in that span. … Coan was 12-6 in his starts with the Badgers, completing 68% of his passes (third all-time at Wisconsin). ... This is Florida State’s first football game played on a Sunday.