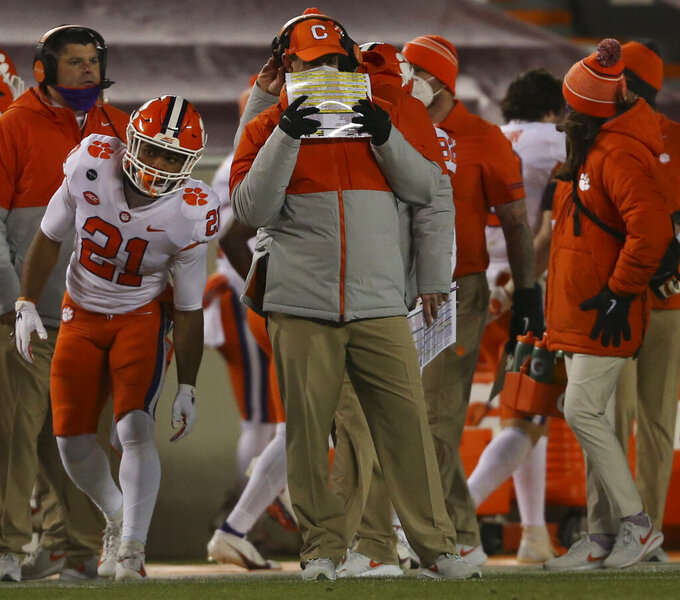 No. 2 Notre Dame and No. 4 Clemson expect to be rested and at full strength when they meet in the Atlantic Coast Conference championship on Saturday.

That wasn't the case when the teams first played a month ago, and adds even more intrigue to the much-anticipated rematch.

This time, though, Clemson (9-1, 8-1; No. 3 CFP) will have several players back, including Heisman Trophy contender Trevor Lawrence. The quarterback missed the first matchup, forced to watch from the sidelines after testing positive for COVID-19.

Notre Dame has had to shuffle its talented and massive offensive line the past few weeks because of injuries.

Right guard Tommy Kraemer was the ACC offensive lineman of the week after Notre Dame beat Boston College on Nov. 14, but missed the following week against North Carolina and saw limited action against Syracuse in the regular-season finale.

Defensive lineman Jayson Adamilola wasn't on the field for the Fighting Irish against Boston College or North Carolina, but practiced all last week.

The extra week off before the championship game has helped the Irish recover, coach Brian Kelly said. After talking with medical personnel, the coach said “we're in a green light situation” with those players.

Clemson is also giving the green light to linebacker James Skalski, a senior considered the heart and soul of the defense who had groin surgery in October and missed the game against the Fighting Irish.

Skalski was also limited the last time Clemson took the field, playing sparingly in a win over Virginia Tech on Dec. 5. But Clemson defensive coordinator Brent Venables believes Skalski will be a factor in the title game.

Along with Skalski, Clemson's defense will have starting linebacker Mike Jones Jr. and defensive tackle Tyler Davis in the lineup, two contributors who weren't on the field against Notre Dame.

Tigers coach Dabo Swinney said the presence of his starters should bring more consistency to the defense that gave up 518 yards to the Irish last month.

“Hopefully, we can do a better job of not giving up some of the big plays,” Swinney said.

That'll be a challenge if Irish quarterback Ian Book plays as well as he did the first time.

The Tigers led 33-26 in the final two minutes when Book connected on a 53-yard pass to Avery Davis to the Clemson 4. Book found Davis again three plays later for the tying TD with 22 seconds left.

Book threw for 310 yards and a touchdown. He also ran for 67 yards.

Lawrence was on the sideline in a mask the first time and watched his backup, DJ Uiagalelei throw for a freshman school record 439 yards in the loss.

The QB returned to the field Nov. 28 against Pittsburgh and has been dominant in his two appearances since, throwing for 598 yards and three touchdowns in victories over Pittsburgh and Virginia Tech.

Book's not worried about who's behind center for the Tigers since Lawrence or Uiagalelei don't play defense.

“My job is to win as the quarterback,” Book said in a radio interview. “Whoever the 11 guys were that they were going to put out there on defense is what we were going to go against.”

Kelly also believes there can be too much made of any one player making a significant difference since football is a game of 11 people playing as one.

The Notre Dame coach said the returning player may do well “but three or four other guys aren't playing at the same level, it negates it.”