'The ones we play for': Iowa keeps 'wave' for young patients 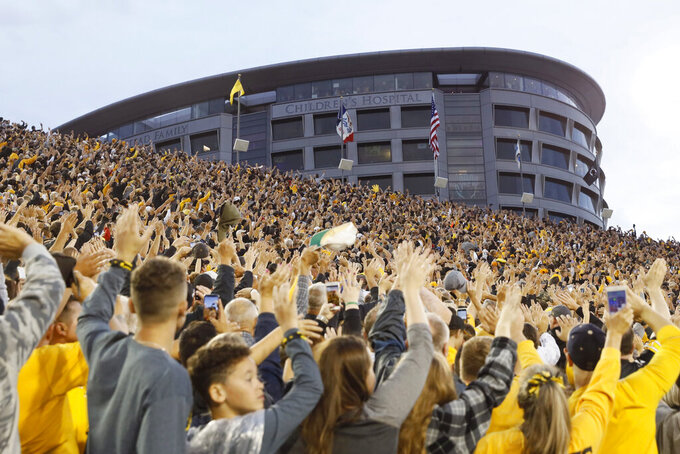 FILE - In this Saturday, Aug. 31, 2019 file photo, Iowa fans wave to children in the University of Iowa Stead Family Children's Hospital at the end of the first quarter of an NCAA college football game between Iowa and Miami of Ohio in Iowa City, Iowa. During a season when the atmosphere will be subdued at Iowa home football games because the usual 69,000 fans won't be there, one tradition will go on uninterrupted. At the end of the first quarter, players and coaches from both teams will turn to the University of Iowa Stead Family Children’s Hospital and wave, just as they've done every home game since 2017.( (AP Photo/Charlie Neibergall, File)

IOWA CITY, Iowa (AP) — Home football games for the University of Iowa won't have the same roar and buzz this season because the usual 69,000 fans won't be there. One beloved tradition will go on uninterrupted.

At the end of the first quarter at the home opener Saturday against Northwestern, players and coaches from both teams will turn to the nearby Stead Family Children’s Hospital and wave, just as they've done every home game since 2017.

“One of the best, if not the best, traditions in college football (is) showing our appreciation and support and love for those families, children, and those health care providers at the children’s hospital,” said Northwestern coach Pat Fitzgerald. "The wave is something I personally look forward to, and I know our players will when we get there. It’s a great tradition in Big Ten sports and in college football.”

There’s plenty of buildup for the first wave of the season, though it won’t look quite the same.

Fans customarily participate along with everyone on the field, but this year the Big Ten has barred the general public from stadiums because of the COVID-19 pandemic, though families of players and staff can attend.

The hospital isn't allowing group gatherings, so patients and their families can't congregate on game days in the “press box,” the event space on the top floor that overlooks the Kinnick Stadium.

“We’ve really had to re-imagine what the tailgate party will look like,” said Emily Baxter, the hospital's child life programming specialist.

Though patients will stay in their rooms and watch the game on television, Baxter and other members of the hospital staff are making sure game days are just as memorable as in years past. Each patient will receive his or her own tailgate bag filled with an assortment of goodies. There’s a window cling that reads, ‘We waved together,’ a commemorative ticket and more.

The ticket, which looks nearly identical to one a fan would purchase, has blanks on the back where patients can fill in their name, room number, how their stay was and what made their day awesome.

And, as the tradition goes, the patients will still wave at the end of the first quarter — just from the comfort of their own rooms. And they will get waves in return from eager players.

“It’s always a really good feeling to look up and know we’re being watched by the kids,” Iowa linebacker Barrington Wade said. “They’re the ones we play for. The wave is definitely a thing we’re all looking forward to.”

The football team’s relationship with the hospital and its patients extends far beyond the wave, though. Players are known to venture up to patients’ rooms to hang out and play video games. They still get to interact with patients during the pandemic, only it’s over Zoom.

The Child Life program also has a pair of Ohmni robots, which patients can control from their beds to get a virtual stadium tour.

“We have a great relationship with the football team, and actually with university athletics across the board and all the different teams,” Baxter said.

Every Wednesday, a pair of athletes from various sports hop on Zoom from their respective facilities. They read a story to the young patients, and it’s broadcast to every room through the hospital’s closed-circuit television program.

When Iowa's season was in limbo, members of the school’s spirit squad and athletes from different sports would meet on a sidewalk outside the hospital every Saturday at 11:40 a.m. — around the time a first quarter would end for an 11 a.m. kickoff— and wave to the patients.

“The wave is very community-sponsored,” Baxter said. “It’s not something we as the hospital put on. It’s been very organic. It’s fun to watch what people come up with.”

The patients want to offer encouragement, too. Each Friday before a game, the football team receives a video with a patient sending a pump-up message.

“Those kids up there, they’re going through things in their daily lives that make our problems, like losing a football game, seem pretty small,” Iowa defensive back Jack Koerner said. “The wave is something we’ve been lucky enough to participate in and really something I always look forward to. And I know the kids up there love it. We love that we can put a smile on their faces.”