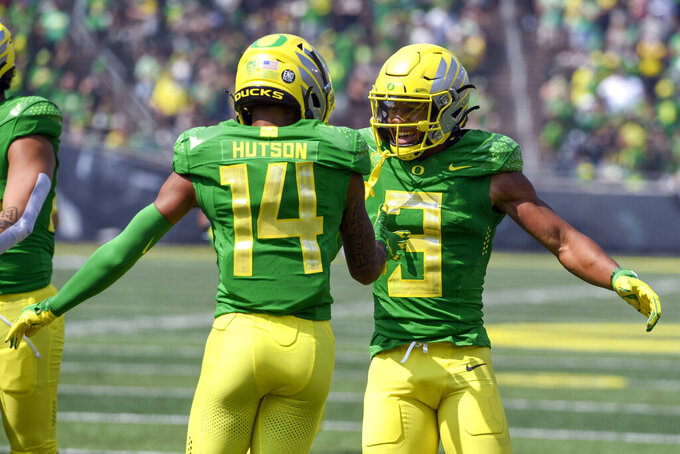 GAME OF THE WEEK: No. 12 Oregon (1-0) faces No. 3 Ohio State (1-0) in front of more than 100,000 fans at Ohio Stadium on Saturday. The Buckeyes were two-touchdown favorites to open the week. The Ducks are coming off a close 31-24 victory last weekend against Fresno State, a somewhat surprising result that dropped Oregon a spot in the AP Top 25. In a season-opening 45-31 win over Minnesota, Ohio State shook off some early shakiness to collect nearly 500 yards in total offense. Freshman quarterback CJ Stroud threw for 294 yards and four touchdowns.

MATCHUP OF THE WEEK: Washington at Michigan. The Huskies (0-1) are coming off a discouraging 13-7 loss at home to lower-division Montana in their opener. Washington was ranked No. 20 before the loss, which dropped the Huskies out of the Top 25 altogether. The Huskies are just the fifth ranked FBS team to lose to a FCS team since 2007. Their resilience will be tested on the road against Michigan, which is coming off a 47-14 rout of Western Michigan. The Wolverines were hurt in the game by the loss of senior receiver Ronnie Bell for the season with a right knee injury.

INSIDE THE NUMBERS: Oregon isn't the only team with a formidable opponent Saturday. Colorado plays No. 5 Texas A&M in Denver. The Buffaloes are coming off a 35-7 victory over Northern Colorado. Colorado leads the series against the Aggies 6-3. ... History doesn't favor Oregon and Colorado this week: a Pac-12 team has not beaten a top-five team in a nonconference game since 2015, when Stanford knocked off No. 4 Notre Dame. ... The Pac-12 went 6-6 in the opening weekend. The South Division fared far better than the North, going 5-1.

PLAYER TO WATCH: USC receiver Drake London just keeps climbing as a NFL draft prospect. He had 12 catches for 137 yards in the Trojans' 30-7 victory over San Jose State last weekend. His 12 catches were the most for a USC receiver since Michael Pittman Jr. had 13 in a game in 2019. Pittman is now with the Indianapolis Colts. London, a 6-foot-5 junior, had 502 receiving yards and three touchdowns in six games last season.

UPSET WATCH: Remember back in the day when then-Stanford coach Jim Harbaugh famously said: “We bow to no one at Stanford.” Well, he was talking about USC. The rivalry between the two teams was heated for many years, although it has cooled somewhat recently. The Cardinal could make some noise in the conference with an upset of USC at the L.A. Memorial Coliseum, especially after that humbling 24-7 loss last weekend to Kansas State. The No. 14 Trojans are coming off a 30-7 victory over San Jose State and they're unlikely to lose with a loaded roster. ___