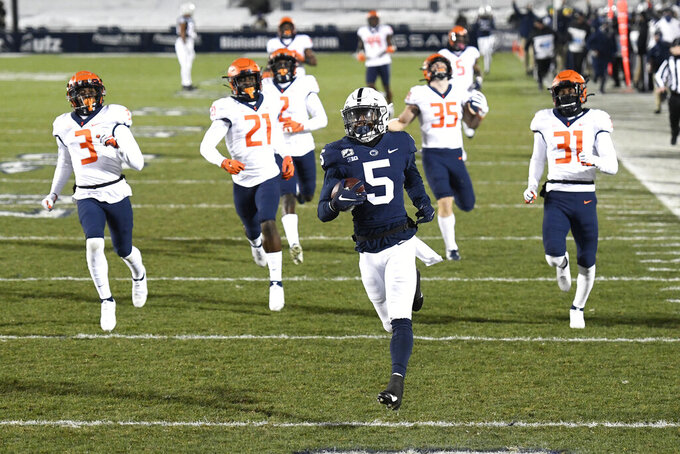 FILE - In this Dec. 19, 2020, file photo, Penn State wide receiver Jahan Dotson (5) scores a touchdown on a 75-yard pass in the first quarter of an NCAA college football game against Illinois in State College, Pa. Dotson opted to return for his final season for a number of reasons. He wanted to get bigger, faster and stronger. He also wanted to help the program re-establish itself as an offensive powerhouse after a disappointing 2020 (AP Photo/Barry Reeger, File)

Dotson is faster now. He’s stronger. He’s always been intelligent. And after an offseason fueled by last season’s disappointment, Dotson believes he’s improved in all areas.

“He’s gonna have a big year,” Castro-Fields said. “What makes him special is, yeah, he has speed, but he controls his speed and his routes. He knows how to manipulate and get in blind spots. You mix speed with craftiness, that’s when you make a great receiver.”

Dotson — who as a freshman reminded coach James Franklin of young Jerry Rice — believes he can be greater. It’s part of the reason he opted to return for his senior year.

Although he led the team with 52 catches for 884 yards and eight touchdowns, he was stung by Penn State's 4-5 season. Dotson, Castro-Fields and safety Jaquan Brisker decided together they wanted their time in the program to end differently.

The 19th-ranked Nittany Lions open the season Saturday at No. 12 Wisconsin.

“We know we have a great challenge in front of us Week 1 from the jump and we’re excited to take it on,” Dotson said. “We’ve got a lot of guys this year who are ready to prove to the world that that team last year at Penn State was not us.”

It’s not a new feeling for Dotson. He’s been motivated to improve before and points to an embarrassing moment in 2019 when then-unbeaten Penn State lost to Minnesota and fell out of the College Football Playoff race.

With his team driving with less than four minutes left, Dotson hauled in a pass over the middle but was caught from behind by a pair of Gopher defenders. Dotson all but tackled himself as he looked over his shoulders on what could’ve been a go-ahead score.

“What I learned from that moment is you’ve got to be ready whenever your number is called,” Dotson said. “That game, I think I had like maybe two catches toward the end of the game and I was kind of cold during the whole game. I hadn’t got my feet wet.”

Simply put, he wasn’t fast enough. When asked who the fastest player on the team is, Dotson is always quick to respond.

But Dotson is close.

Since the Minnesota game, he’s made it his mission to add speed. Body control and quickness have never been an issue for the former high school long jumper and hoops star, but he’s shaved a few tenths of a second off his 40-yard-dash time by working with Penn State staff on his technique and conditioning.

He ran a 4.33 this summer and has described camp as the best one he’s had yet.

“What really pushed me to be honest was guys on that team,” Dotson said. “When KJ (Hamler) was here, he never let me live down the Minnesota moment, so literally getting faster, being faster, that was always something I was trying to prove to everyone.”

Dotson will line up to attack a Wisconsin defense that was ranked 31st nationally against the pass last year, flanked by teammates Parker Washington and KeAndre Lambert-Smith. They’re sophomores who, because of COVID-19 restrictions, haven’t experienced a home crowd yet, much less one as hostile as what Wisconsin will pack into Camp Randall Stadium on Saturday.

“Our coaches have been preparing us in a tremendous way,” Dotson said. “When we get in those moments, we’re not flustered, our minds not racing and we’re going to be cool, calm and collected and we’re going to resort back to our training.”

He’ll likely get more opportunities to quiet the crowd on punt returns, where Franklin has deployed him with great success. Dotson set a program record for punt return average last year with 24.6 yards per game.

“Sometimes you don’t think he’s running very fast because he’s just so fluid in the way he does it, but no one catches him. He’s subtle kind of with his moves,” Franklin said. “But now that he’s more explosive and stronger and bigger, I think that’s got a chance for him to translate into more explosive plays for us, which I think is really important.”