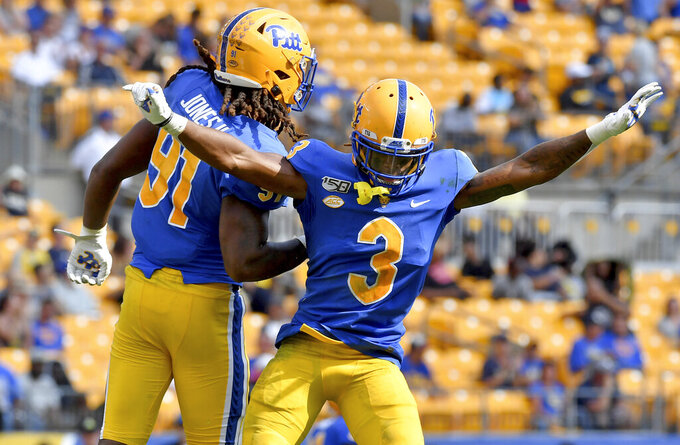 PITTSBURGH (AP) — Less than an hour before Pittsburgh kicked off against Delaware at Heinz Field on Saturday, coach Pat Narduzzi still wasn't sure who his starting quarterback would be.

Regular starter Kenny Pickett had suffered a shoulder injury the week before against UCF and though he returned to star in that upset, he didn't practice much in the week leading up to the meeting with the Blue Hens.

When the final decision was made, Pickett was out and redshirt freshman Nick Patti was in.

With Pickett and more than a half-dozen other starters on the sidelines with injuries, the Panthers were in for an unexpectedly close battle with the Blue Hens.

Trailing in the fourth quarter, Patti directed an eight-play, 90-yard drive, finding Taysir Mack in the end zone from 12 yards out to put Pitt in the lead for good for a closer-than-expected 17-14 victory.

Patti and Mack utilized a connection built during the week of practice to hook up five times for 124 yards, including a crucial 48-yard completion on a third-and-17 to keep that scoring drive moving.

"He's a guy that takes the top off the defense and is a great playmaker," Patti said. "But we have more guys like that. It was just Taysir getting his number called, going out and executing."

Patti finished 23 of 37 for 271 yards and two touchdowns while making his first career start, but a poor decision on a first-half interception let the Blue Hens into the game,

After a Patti was picked off on a pass thrown right to Blue Hens defensive back Tim Poindexter, Nolan Henderson passed 7 yards to Gene Coleman II to tie the game.

"That was not the Pitt football team I like to see," coach Pat Narduzzi said. "I don't think we came out with the emotion that we could have. I thought we came out flat. Blame me for that."

When Pitt receiver Maurice Ffrench fumbled in the third quarter to give Delaware another short field, Henderson hit Jourdan Townsend with a 5-yard score to give the Blue Hens a four-point lead.

"We had a little momentum and we had the opportunity to extend our lead and we just were not able to do that," Delaware coach Danny Rocco said.

That's when Pitt's offense found a much-needed spark in the fourth quarter to turn the tide of the game.

"It's the first time that I've played a full game," Patti said. "Staying consistent throughout the game was a challenge, but I just tried to get better as the game went on."

Delaware: The Blue Hens had one shot against a Power 5 team on their 2019 schedule, and they made an impact by taking Pitt to the wire. The question will be whether they can translate that showing at the FCS level where Delaware plays in a Colonial Athletic Conference that features six ranked teams, including the Blue Hens.

"These moments don't come along very often," Rocco said. "The norm is not to be in a one-possession game. . We've got to move it forward, as always."

Pitt: Despite the win, the slog over the Blue Hens sapped any momentum the Panthers may have had coming off an upset over then-No. 15 UCF a week ago. The absence of Pickett is concerning for the Panthers' offense. He entered the week fifth in the FBS in completions per game.

Narduzzi said after the game that all of them were dealing with injuries but declined to reveal their statuses moving forward.

Without the Davises at running back, Pitt turned to redshirt sophomore Todd Sibley. The former four-star recruit had just 11 career carries coming into Saturday's contest but became the featured back.

Sibley finished with 22 carries for 106 yards, Pitt's first 100-yard performance on the ground this season, including a 20-yard carry on the final touchdown drive.

"I took the challenge to heart," Sibley said. "Once our two guys went down, I knew that I had to step up to the plate. I took practice really, really seriously this week. I think I practiced harder than I've ever practiced."

Pitt: Returns to ACC play with a trip to 3-1 Duke next Saturday.