Purdy and Shough return to their roots at the Fiesta Bowl 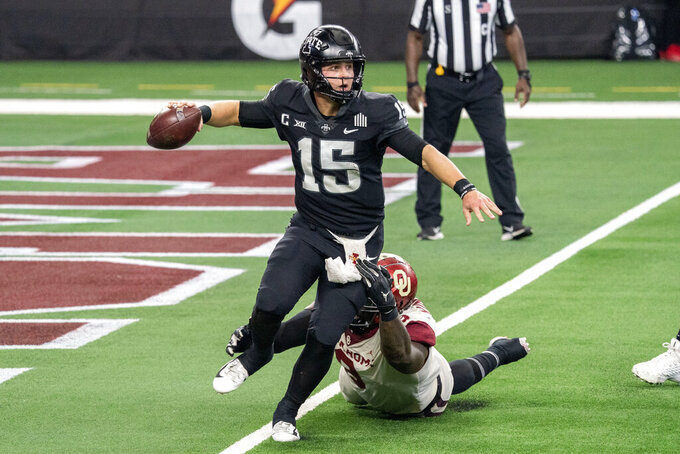 GLENDALE, Ariz. (AP) — Iowa State's Brock Purdy and Oregon's Tyler Shough were baseball teammates when they were younger. They work out together in the offseason and have the same quarterbacks coach.

They played against each other four times in high school, including two games that have been called the greatest in Arizona history.

Now Purdy and Shough are headed back to where it all began.

When No. 12 Iowa State faces No. 25 Oregon in the Fiesta Bowl, it will not just be a chance for two Top-25 programs to cap their seasons with a win in a New Year's Six bowl.

The game Saturday also will be a homecoming for the two starting quarterbacks, a chance for two friends and rivals to measure themselves against each other again.

“We really do both hope for the best for each other,” Purdy said. “When you step on the field it’s a game where you have to compete and I think both of us understand that. We do a great job with that.”

Purdy and Shough have known each other since playing together on a club baseball team coached by former major leaguer Clay Bellinger, father of Los Angeles Dodgers star Cody Bellinger.

Purdy and Shough were also excellent quarterbacks who worked out with the same coach and became rivals when Shough went to Hamilton High School in Chandler and Purdy to Perry in Gilbert.

They met four times in high school with Purdy and the Pumas winning each time — two by the scores of 65-63 and 63-60.

“I remember just going out and really whoever had the ball last was going to win,” Purdy said.

The two quarterbacks left the Valley of the Sun after their high school careers, but still work out together in the offseason and keep in touch between games.

Shough was rated as the No. 1 recruit in Arizona by the 247Sports composite in the 2018 class. The 6-foot-5, 221-pound quarterback chose to play at Oregon and, after a redshirt season in 2018, spent the 2019 season as Justin Herbert's backup.

Given the chance to run the team himself, Shough shined in 2020. He completed 63% of his passes for 1,480 yards and 13 touchdowns with five interceptions in six games. He led the Ducks (4-2) to their second straight Pac-12 Championship and New Year's Six bowl after winning the 2020 Rose Bowl.

“Tyler has developed nicely throughout the season,” Ducks offensive coordinator Joe Moorhead said. “The past couple of games there’s some things we need to clean up and get better. You don’t want to get lost in the shuffle. He’s a first-year starting quarterback in a Power Five school in a brand new offense.”

Purdy set Arizona state 6A records with 4,405 yards and 57 touchdowns while leading his team to the 2017 state championship. He was rated the No. 10 prospect in Arizona and chose Iowa State over Alabama, Texas A&M, Illinois and UCF.

Purdy had one of the best seasons by a freshman quarterback in Iowa State history, throwing for 2,250 yards and 16 touchdowns in 2018. the 6-1, 212-pound quarterback set multiple school records as a sophomore, including 4,231 passing yards and 27 touchdowns.

This season, Purdy threw for 2,594 yards and 18 TDs with nine interceptions while leading Iowa State to its first major bowl game.

Now the road leads the two quarterbacks back to the desert. They put on a show when they faced each other in high school and have proven they can put up big numbers in college.

College football fans are hoping they can do it again on Saturday.