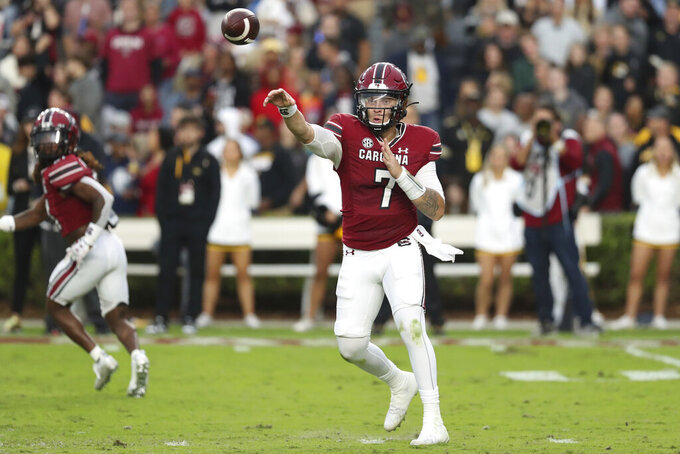 Both were highly regarded prep stars from the West expected to dominate in college. Each had on-field adversity and critics that caused a change in course. Now, the two get another chance to show how far they've come when the Gamecocks take on the seventh-ranked Tigers on Saturday in the Palmetto State's biggest sporting event.

The Gamecocks (7-4) look to break a seven-game series losing streak to the Tigers (10-1) this weekend, as Rattler and Uiagalelei seek more evidence their problems of the past are behind them.

The two were near the top of most Heisman Trophy lists before the 2021 season.

Rattler was coming off a Big 12 title season at Oklahoma, a savvy sophomore with a big arm on his way to 14 straight wins as a starter.

Uiagalelei, also a sophomore, entered his first season as a Clemson starter as the heir apparent to NFL No. 1 draft pick Trevor Lawrence.

Things, though, didn't go according to plan for either one of them.

Rattler was replaced with OU trailing rival Texas in the middle of the 2021 season by freshman Caleb Williams, who rallied the team to victory and never gave up the starting job. That sent Rattler looking for a new location — and former Oklahoma assistant Shane Beamer — to reignite his career.

Uiagalelei and the Tigers, meanwhile, started 4-3 and missed out on the ACC championship and a College Football Playoff berth for the first time since 2014.

Outsiders were harsh, blasting Uiagalelei as the problem and planning for incoming five-star passer Cade Klubnik to take over the Tigers. Instead, Uiagalelei went to work on his body, his technique and his mindset, shedding about 30 pounds, improving his decision making and tuning out the critical voices.

Both have shown results on the field.

Rattler, inconsistent at times this season, has led the Gamecocks to a second straight bowl appearance in Beamer's two seasons. He showed off his old brilliance last week with 438 yard passing and a school record six touchdowns in a stunning 63-38 win over then-No. 5 Tennessee.

Rattler is averaging 220 yards a game, seventh in the Southeastern Conference, with 14 touchdowns and nine interceptions.

“He's a five-star quarterback for a reason and a starter at Oklahoma for a reason,” Clemson coach Dabo Swinney said. “He's a really talented player.”

Uiagalelei led Clemson to a 7-0 start and a No. 4 national rank, then was benched for Klubnik in the next two games in a win over Syracuse and the Tigers' only loss this season at Notre Dame. Uiagalelei was steady and productive after that in victories over Louisville (31-16) and Miami (40-10) the past two weeks.

Uiagalelei has completed 65% of his throws with 21 touchdowns and six interceptions.

“He's been through a lot, a lot of unfair treatment,” Rattler said. “He's a great player and does a lot of good stuff.”

Uiagalelei said he met Rattler when he was a junior in high school and the two attended several camps together.

Beamer said Rattler and Uiagalelei share a steady poise in all situations and a confidence in their ability.

“Spencer was fantastic on the field Saturday night and off the field since the day he got here,” Beamer said. “I would imagine it's the same for DJ and the way that he is in their program also.”