Rice, No. 15 Marshall set to meet in rescheduled game 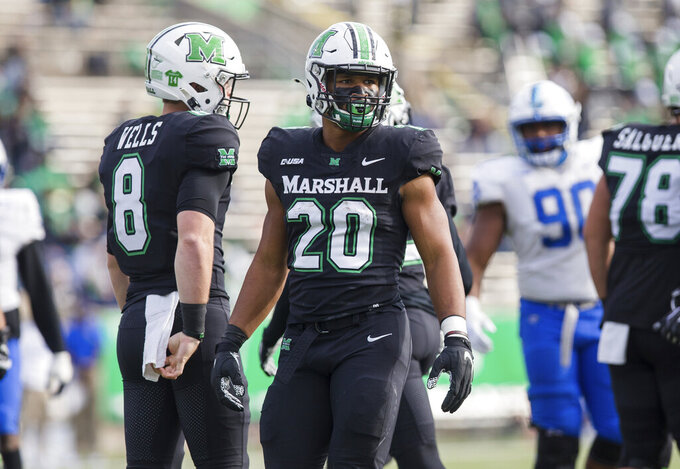 FILE - Marshall running back Brenden Knox (20) looks to the sideline for a call during the team's NCAA college football game against Middle Tennessee in Huntington, W.Va., in this Saturday, Nov. 14, 2020, file photo. Rice and No. 15 Marshall meet on Saturday, Dec. 5 in a game that was postponed from Oct. 3. (Sholten Singer/The Herald-Dispatch via AP, File)

Marshall is trying to stay undefeated and on a path toward the league championship game. In a matchup of teams that have had more postponements than games played, Rice played once in November while Marshall is trying to get back on track after having two weeks off. This is a makeup game from Oct. 3, which was called off due to COVID-19 issues with the Owls.

Rice: QB Mike Collins. The 6-foot-5 Collins has thrown 10 TD passes and one interception in three games. His 267-yard-per-game average is tops among Conference USA quarterbacks.

Marshall: RB Brenden Knox. The junior is looking to get restarted after his streak of consecutive 100-yard rushing games was snapped at five in the Thundering Herd's last game.

Rice's game last week against UTEP was canceled due to virus issues with the Miners. ... Marshall is coming off a bye week and is looking for its first 8-0 start since 2014, when it started 11-0 and finished 13-1. ... The Thundering Herd have surrendered just five sacks in seven games. ... Marshall has the nation's best rushing defense, allowing 65 yards per game. ... Rice's Austin Trammell is second in the league with six TD receptions. ... The game will feature a pair of standout linebackers: Rice's Blaze Alldredge has 32 tackles and a sack, while Marshall's Tavante Beckett has 69 tackles, four fumble recoveries and a forced fumble.