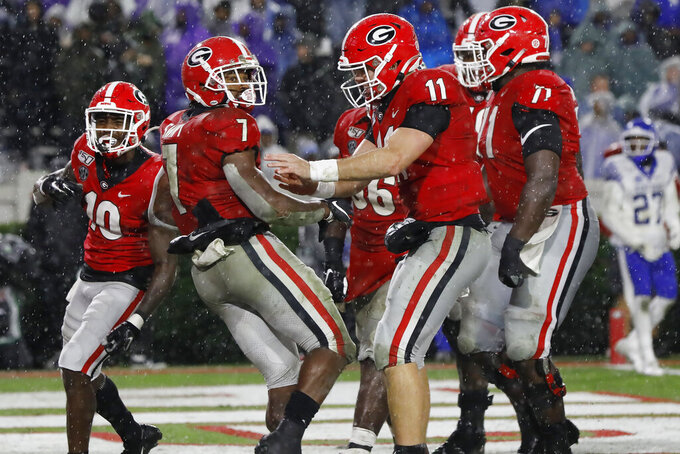 Georgia's D'Andre Swift (7) celebrates with quarterback Jake Fromm (11) after scoring a touchdown in the second half against Kentucky during an NCAA college football game Saturday, Oct. 19, 2019, in Athens, Ga. (Joshua L. Jones/Athens Banner-Herald via AP)

ATHENS, Ga. (AP) — D'Andre Swift didn't blink when told the team with the most yards rushing has 13 straight wins in the Georgia-Florida rivalry.

"Oh, I'm very aware of that," said Swift, the Georgia running back.

It's not complicated situation for Swift.

"That means outrush them," he said Monday.

Georgia leads the Southeastern Conference in rushing. Swift is the league's top rusher.

The ground game is especially important for No. 8 Georgia (6-1, 3-1 SEC) against No. 6 Florida (7-1, 4-1) in Saturday's game. The winner has the advantage in the race for a spot in the SEC championship game.

The running attack has been the only constant for a slumping Georgia offense. The Bulldogs responded to a 20-17 loss to South Carolina on Oct. 12 by struggling through a scoreless first half in their 21-0 win over Kentucky one week later.

After throwing three interceptions and losing a fumble against South Carolina, Jake Fromm threw for only 35 yards against Kentucky in the rain. Swift ran for 179 yards and two touchdowns against the Wildcats.

Florida coach Dan Mullen said Swift is "one of the best backs, if not the top back, in college football right now. He's got breakaway speed, power, can make you miss in the open field."

Following the loss to South Carolina, Swift asked for more creative play-calling by Georgia coaches. He asked for playmakers to get the ball in space more often instead of repeated runs straight at the middle of defenses.

It was an unusual move for a college player, but Swift said he didn't receive any negative feedback.

"I didn't know if they would pay attention to me, but I think it needed to be said," Swift said.

Swift's sentiments are shared by some fans. When the bad weather led to conservative calls in the first half against Kentucky, there were boos from the stands.

Swift had more suggestions on Monday.

"We need to work on stuff like play-action, screens, stuff like that," he said. "Different run plays, just different things that can put us in better situations to help us win."

Asked about the slow start by Georgia's offense against Kentucky, Mullen said "You sort of throw that one out" because of the rainy, windy and cold conditions.

The loss to South Carolina is a different matter.

"I thought South Carolina had a good plan, played really hard, made plays when they needed to make plays," Mullen said.

Georgia coach Kirby Smart said Florida's defensive line will be the "ultimate test" for the Bulldogs. Led by linebacker Jonathan Greenard, a Louisville graduate transfer from Hiram, Georgia, the Gators lead the SEC in sacks. Georgia has allowed only four sacks, easily the lowest total in the league.

Georgia ranks only sixth in the league in passing. Despite the recent downturn in scoring, the Bulldogs average 36 points per game and have had an open week to fine-tune the offense.

"I think we're just finding ways to win," Swift said. "No matter how bad it looks on TV or how bad the fans may think it is. Just find a way to win, no matter what that takes, running the ball or passing the ball. Whatever it takes in that game or that situation.

"That's what Georgia is going to do every time."