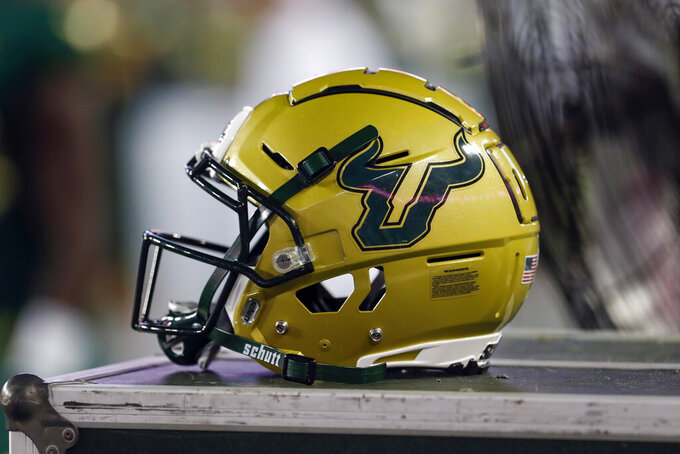 FILE - A South Florida helmet rests on a case on the sideline during an NCAA football game on Aug. 30, 2019 in Tampa, Fla. South Florida has been fined $10,000 and placed on three years' probation for NCAA violations committed by the football and women's basketball programs, the NCAA Committee on Infractions announced Friday, Oct. 29, 2021. (AP Photo/Mark Lomoglio, File)

TAMPA, Fla. (AP) — South Florida has been fined $10,000 and placed on three years' probation for NCAA violations committed by the football and women's basketball programs.

The NCAA Committee on Infractions announced Friday its approval of a negotiated resolution with the USF that ended an 18-month investigation.

USF self-reported the potential violations, the school and NCAA said.

In football and women's basketball, non-coaching staff members were found to have participated impermissibly during practice and off-field activities.

In addition to the fine and probation, the football program will be docked two scholarships for next season.

Strong, who is currently coaching with the Jacksonville Jaguars, faces a one-game suspension if he returns to the college football with an NCAA member school.

Fernandez received a one-year show-cause order and will be restricted from participation in 15 hours of team practices during the 2021-22 season. The team also was stripped of 12 total practice hours for this season.

“While these were isolated incidents, I appreciate the NCAA’s diligence in this inquiry and take full responsibility,” Fernandez said in a statement. "I will continue to work closely with our compliance department to ensure our program maintains a level of compliance that aligns with the NCAA’s high ethical standards.”