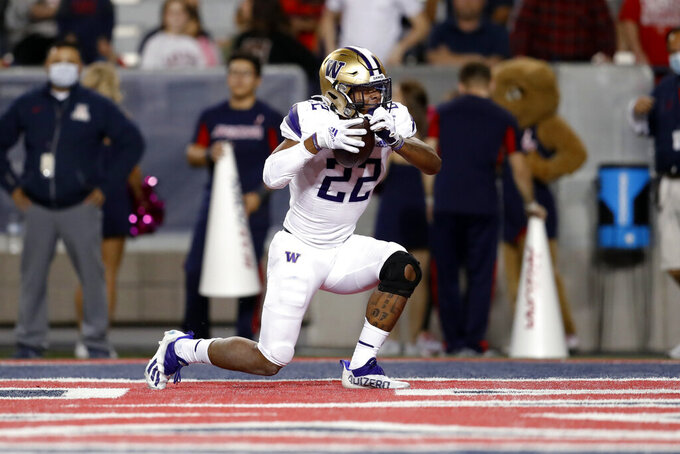 Washington running back Cameron Davis (22) reacts after scoring a touchdown during the second half of the team's NCAA college football game against Arizona on Friday, Oct. 22, 2021, in Tucson, Ariz. (AP Photo/Chris Coduto)

STANFORD, Calif. (AP) — Stanford coach David Shaw sees a lot of similarities between his team and Washington, just not the kind of trends to put either team in contention.

Both teams head into Saturday’s matchup with sub-.500 records. Each needs a win to avoid falling further down in the Pac-12 North division and to strengthen any hopes of playing in the postseason.

“The Huskies don’t have the record that they wanted but they’ve been in a lot of these games, kind of just like us,” Shaw said. “They’ve had some ups and downs, some really difficult quarters followed by some really great quarters.”

Stanford has two wins over Top 25 teams this season, including an overtime win against Oregon on Oct. 2. But the Cardinal followed that up with a 28-10 loss to Arizona State before falling to Washington State 34-31.

“I want to say we’re a better team than 3-4 but 3-4 is how we played," Shaw said. “Every coach and player on our team thinks we’re better than our record but that doesn’t matter. We have to play better in order to win games.”

The Huskies lost four of their first six games. Washington fell behind 13-0 against Arizona before rallying in the second half for a 21-16 victory last week.

“What we’re learning is these guys are tough, resilient,” Huskies coach Jimmy Lake said. “It’s been an up and down season but our guys have stayed together. they’ve stayed united. Most importantly they continue to go to work.”

Stanford has won the last two against Washington and is 7-3 against the Huskies under Shaw.

The game against Washington will be Stanford’s first at home in nearly a month. The Cardinal, who played four of their previous six games on the road, will be at Stanford Stadium for four of their final five.

“We talked about it all summer, we were going to have the toughest opening slate in America,” Shaw said. “We didn’t fare as well through it as we would have liked to. We have to take advantage of being home.”

GETTING IT DONE IN THE RED ZONE

Washington is one of three FBS teams that have scored on every trip into the red zone this season. The Huskies have 14 touchdowns and five field goals in 19 red zone opportunities. LSU and TCU are also perfect in the red zone. Stanford has been almost as efficient, converting on 22 of 23 trips inside the 20-yard line.

Washington’s run game and its run defense were thought to be strengths entering the season. Instead, they’ve both been glaring weaknesses.

Despite a deep group of running backs, Washington has topped 100 yards rushing as a team in only two of seven games.

Tanner McKee has steadily improved and settled in as Stanford’s starting quarterback after replacing Jack West after the first game. A sophomore, McKee is tied for second in the Pac-12 with 14 touchdowns, is third with 1,722 passing yards and is fourth in completion percentage (64.7).

“My dad says it all the time, guys like Tanner, they just need more suns coming up and more suns going down,” Shaw said. “He has gotten better every week. Dare I say he looks like one of the best, if not the best, quarterback in our conference from time to time. He can reach those heights."