Struggling 'Canes and Cavaliers to square off at Virginia 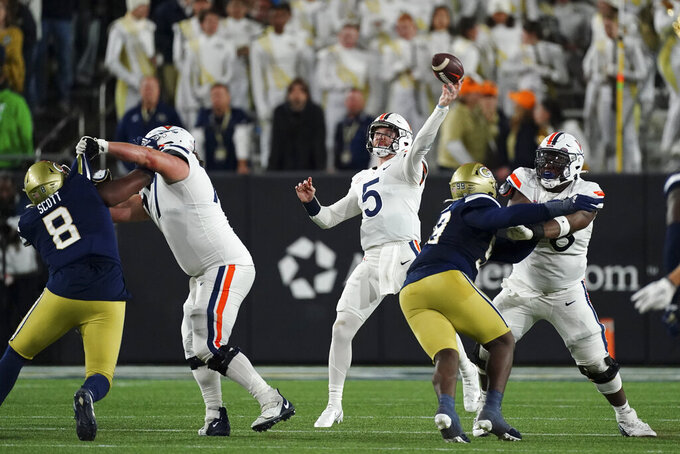 Virginia quarterback Brennan Armstrong (5) throws a pass during the first half of the team's NCAA college football game against Georgia Tech on Thursday, Oct. 20, 2022, in Atlanta. (AP Photo/John Bazemore)

Line: Miami by 1 1/2, according to FanDuel Sportsbook.

Two programs with first-year coaches look to get one win closer to bowl eligibility. The Cavaliers are coming off a Thursday night 16-9 victory at Georgia Tech in which the offense continued to struggle but the defense was stout. Miami had eight turnovers in a 45-21 home loss to Duke, its fourth loss in the last five games.

Miami QB Jake Garcia against the Virginia defense. Tyler Van Dyke left the loss to Duke with an apparent shoulder injury and is likely to miss the game. He was replaced by Garcia, who completed 13 of 21 attempts for 198 yards with two touchdowns and three interceptions. The Cavaliers tied the national season high with eight sacks against the Yellow Jackets.

Miami: TE Will Mallory. The 6-foot-5 tight end may well become the safety net receiver for Garcia, especially if the Cavaliers pass rush is effective. He leads the Hurricanes with 25 receptions for 349 yards and one touchdown.

Virginia: QB Brennan Armstrong. He had one of his best games in Virginia's new offense against the Yellow Jackets, throwing for 255 yards and a TD and rushing for 91 yards and another score. He's got a rushing TD in three straight games.