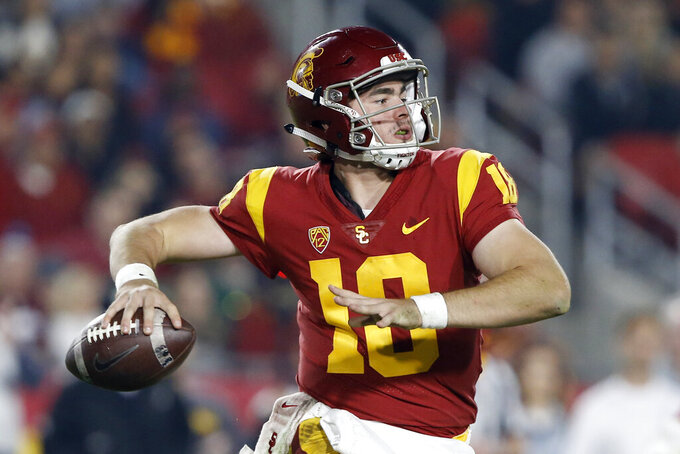 FILE - In this Nov. 10, 2018, file photo, Southern California quarterback JT Daniels (18) throws a pass during the second half of an NCAA college football game against California in Los Angeles. Sophomore J.T. Daniels was resolute he is the best man for the job after retaining his starting job. (AP Photo/Alex Gallardo, File)

Based on the reactions from his quarterbacks after the first depth chart at the position was released Tuesday, Harrell looks to have succeeded in that aim.

Sophomore J.T. Daniels was resolute he is the best man for the job after retaining his starting job in the four-man competition. Freshman Kedon Slovis found it strange he was being congratulated for coming in second. And redshirt junior Matt Fink did his best to keep his admittedly emotional disposition in check after being named third string.

"I don't think there is too much to separate the quarterbacks," Daniels said Wednesday night. "Everybody came out, they competed every single day. A lot of improvement I think from each player in the room."

Harrell said Daniels' consistency during spring practice and training camp was what ultimately gave him the edge in the race, which also included redshirt sophomore Jack Sears. It was a welcome development after a turbulent freshman season for Daniels, during which he threw for 2,672 yards and 14 touchdowns against 10 interceptions in 11 starts.

Daniels said the constant pressure from Slovis, Fink and Sears was invaluable in forcing him to keep getting better, with an extra emphasis on improving his pocket presence.

Daniels added that the internal pressure from himself and his teammates is more important than the notion of proving the naysayers wrong after the Trojans ranked 91st nationally in scoring offense and finished with a losing record for the first time since 2000.

"I'm not excited to go out there to prove them wrong," Daniels said. "I'm just excited to play football."

A similar optimism carried Slovis to the backup role. The Scottsdale, Arizona, product was a modest three-star recruit, but Harrell seems more than sold on Slovis' abilities. If Daniels were to get injured, Harrell has no doubt Slovis would be able to perform at a high level this season.

"Talent-wise, he's as good as I have ever seen," Harrell said. "That obviously helps his cause. And then I think with Kedon, what he probably did the best was come in and expected to play well, came out here and didn't hesitate. Didn't act like a freshman."

Slovis had no expectations for his part in the competition other than to do his best against the three more experienced players. Still, he found it odd to receive such a positive response to being named the runner-up.

"That was kind of a weird deal because people are saying congratulations, and you want to be the guy, you know?" said Slovis, who graduated high school early to participate in spring practice.

As for Fink, who entered the transfer portal in April and committed to Illinois before returning to USC, he tried to keep a positive outlook on the situation.

"Was I surprised? Of course I was surprised," Fink said. "I obviously thought that I was the best of the group. I'm sure everyone thought the same way, though."

Sears, who started against Arizona State last season after Daniels suffered a concussion, chose not to speak with reporters.

Harrell viewed the disappointment expressed by Slovis and Fink at not being named the starter as a good sign in bringing back the swagger for an offense that averaged 26.1 points per game last season. The former Texas Tech quarterback and North Texas coordinator wants a group that expects good things to happen when it is on the field.

Based on Fink's pledge that he, Slovis and Sears will continue to push Daniels, USC looks to have that aspect of Harrell's new offense already engrained going into its season opener against Fresno State on Aug. 31.

"There's still a lot of ball left, and that's a good thing," Fink said. "We have a whole season ahead of us. You never know what's going to happen. Obviously, last year we had three quarterbacks plays. Whether it be Kedon, me or Jack, we're all going to be ready for when our time comes."