Wide gap between Alabama, Georgia and other SEC contenders 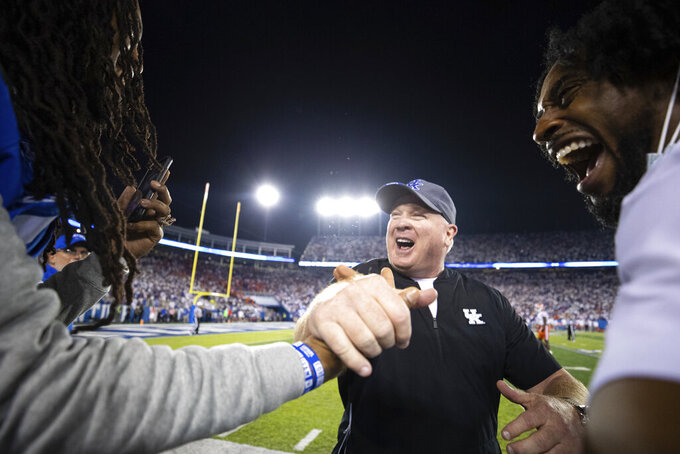 Alabama and Georgia have made it abundantly clear they're the cream of the Southeastern Conference yet again this season as the top-ranked teams in the nation.

When thinking of the gap between the Crimson Tide and the Bulldogs and the rest of the league think Elvis Presley and the Jordanaires. Figuring out the best of the backup group is a bit more fuzzy after Florida, Ole Miss, Texas A&M and LSU all lost last weekend.

No. 16 Kentucky, the only other undefeated SEC team, and No. 18 Auburn have pushed their way up the list of contenders.

Staying there means handling the next SEC test on Saturday.

“We haven’t played our best football,” Kentucky coach Mark Stoops said. "So, they see the proof. Now, I hope they’re just hungry, and I believe they will be.”

The Wildcats are in the midst of their most challenging stretch in recent memory amid just their fourth 5-0 start in 70 years. After beating Florida in Kentucky for the first time since 1986, the Wildcats host LSU on Saturday night followed by a trip to No. 2 Georgia.

Kentucky has won four straight by seven points or less thanks to a defense ranked 10th nationally in yards allowed despite losing linebacker Jamin Davis (Washington) and cornerback Kelvin Joseph (Dallas) to the NFL last spring. The Wildcats, who also held off FCS Chattanooga, held a potent Florida offense to 386 yards in last week's 20-13 upset.

The Gators won the SEC East last year, increasing expectations for this year. They opened this season with their first four games inside their home state. Now the Gators have two SEC losses and are fourth in the East — a spot below Tennessee.

"There’s a lot of football still to be played this year, so we’ll see how this year plays out,” Florida coach Dan Mullen said.

Auburn, with only one loss that came at Penn State last month, plays Georgia on Saturday after rallying for its first win at LSU since 1999.

Auburn and first-year coach Bryan Harsin have had three straight games come down to the wire, including against heavy underdog Georgia State. The Tigers have a brutal closing schedule capped by hosting defending national champ Alabama to wrap the regular season.

“We know people think we shouldn’t be ranked or whatnot,” Auburn defensive end Eku Leota said. “It helps to motivate us to bring it out every week and show these guys we really deserve the opportunities that aren’t presented in front of us."

No. 13 Arkansas certainly thought it was ready to push Alabama and Georgia. Then came the Razorbacks' first true SEC road test, and coach Sam Pittman said everyone saw they weren't ready for the grand stage just yet.

His Razorbacks still have time to prove they won't wilt under the bright lights. They visit No. 17 Ole Miss on Saturday, then host Auburn. The Razorbacks also have back-to-back road trips in November to LSU and Alabama.

LSU is close to being 2-0 in the SEC, having won at Mississippi State and leading all but the final 3:11 of last week's loss to Auburn. If LSU wants back in the conversation about the best of the rest, the Tigers will have to earn it starting with their trip to Kentucky.

Then LSU hosts Florida before going to Ole Miss and Alabama with Arkansas also on the home slate. Not that it will matter if the Tigers can't figure out how to run the ball, struggling so that coach Ed Orgeron is sharing his exasperation with his offensive line.

Texas A&M knows only too well how quickly things can change in the SEC.

The Aggies rose as high as No. 5 in the rankings before a two-game skid with losses to Arkansas and Mississippi State knocked them out of the Top 25.

And things don't get any easer when Alabama visits Saturday night. The Aggies' goals also have changed, though coach Jimbo Fisher doesn't have time to worry about that in the midst of the SEC season.

“We have got to become a good football team,” Fisher said. "Let’s line up and keep playing and see where the year takes us.”