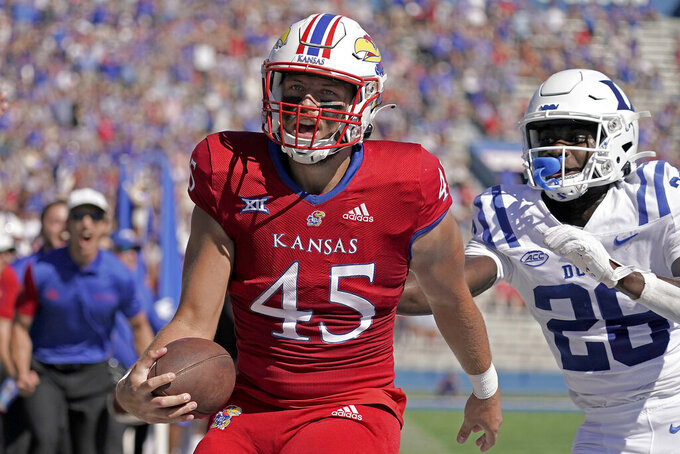 Kansas tight end Trevor Kardell (45) is chased by Duke defensive back Joshua Pickett (26) as he runs for a touchdown during the first half of an NCAA college football game Saturday, Sept. 24, 2022, in Lawrence, Kan. (AP Photo/Charlie Riedel)

A 4-0 start put the Jayhawks atop the others receiving votes pile Sunday in The Associated Press college football poll presented by Regions Bank, 41 points behind No. 25 Kansas State.

The Jayhawks have not been ranked since mid-October 2009, a dry spell of nearly 13 years that is currently the longest among Power Five conference programs.

Getting stuck behind the Sunflower State rivalry must have been particularly annoying to Kansas fans.

The Wildcats moved into the rankings for the first time this season after upsetting Oklahoma in Norman on Saturday. That big win came a week after K-State lost at home to Tulane, which in turn lost to Southern Mississippi on Saturday.

Those types of results can twist voters in knots.

Meanwhile, Kansas and quarterback Jaylon Daniels have rolled through Tennessee Tech, West Virginia, Houston and Duke, with the middle two on the road. Take out the FCS opponent and the Jayhawks have an average margin of victory of 13 points.

They also rank third in the nation behind No. 3 Ohio State and TCU and just ahead of No. 2 Alabama in yards per play (7.80). Nice company.

Kansas' resume has a similar look to No. 24 Pittsburgh's. Both beat West Virginia in close games. Both have Group of Five road wins: Kansas at Houston and Pitt at Western Michigan. Both beat FCS schools.

The difference is Pitt lost an OT game to No. 8 Tennessee at home and Kansas handed Duke its first loss of the season.

Close call, but Reality Check says advantage KU. The voters are going to make the Jayhawks do more.

Reality check: An “off” week included outgaining Kent State by 248 yards and turning it over three times. Excuse the Bulldogs being a little bored.

Reality check: Tide had a couple weeks of tune-up after Texas to tighten things up before starting a six-game run in the SEC that includes four teams currently ranked in the top 20.

Ranking: Could make a case for Ohio State here.

Next: at Iowa, Saturday.

Reality check: RB Blake Corum went for 243 yards on 30 carries in the Wolverines' first competitive game against Maryland. Michigan doesn't have a big back like Hassan Haskins to pair with the 5-foot-8, 210-pound Corum this season.

Next: vs. No. 10 North Carolina State, Saturday

Reality check: An encouraging performance by QB D.J. Uiagalelei and his receivers against Wake Forest was tempered by the reality that this Clemson D has got a long way to go to be as dominant as advertised.

Ranking: Could be four. Could be eight.

Reality check: Trojans lead the nation in interceptions (11), are tied for the lead in total takeaways (14) and are the only team in the country that has not committed a turnover. Yep, that'll get you to 4-0.

Next: at No. 14 Mississippi, Saturday.

Reality check: Been a different kind of Wildcats offense so far, leaning hard on QB Will Levis and big passing plays with a sputtering running game. Expected return of RB Chris Rodriguez could change that.

Reality check: Not sure we are really appreciating the awesomeness of QB Hendon Hooker, who has yet to throw an interception and ran for 112 yards against Florida.

Reality check: Cowboys have solidified a top-10 spot without much of a resume as six top-10 teams have lost in the first four weeks.

Reality check: The Wolfpack lead the ACC in interceptions with seven, including two apiece from DBs Tyler Baker-Williams and Aydan White, and should be a good barometer for just how much Clemson's passing game has improved.

Next: vs. Northwestern, Saturday.

Reality check: Utes have been rolling since leaving The Swamp disappointed in Week 1, but took a big loss against Arizona State when leading receiver and TE Brant Kuithe left with a leg injury.

Next: vs. Stanford, Saturday.

Reality check: It wasn't just Georgia. Pass defense is a problem. The Ducks are allowing 72.5% of passes to be completed, third worst in the country.

Reality check: Running Rebels are averaging 281 yards per game on the ground behind the combination of transfer Zach Evans (365 yards and four touchdowns) and freshman Quinshon Judkins (429 and five).

Next: at UCLA, Friday night.

Next: vs. No. 9 Oklahoma State, Saturday.

Reality check: Aggies have thrown for a total of 388 yards against three FBS opponents and might be without leading receiver Ainias Smith, who left the Arkansas game with an apparent leg injury, for a while.

Next: at TCU, Saturday.

Reality check: No, Brent Venables was not able to make all Oklahoma's defense issues go away in his first season as coach.

Next: vs. Utah State, Thursday.

Reality check: A fumble at the goal line and a doink off the top of an upright kept the Razorbacks from a 4-0 start The schedule is unrelenting for the next three weeks.

Reality check: Hard to overstate just how dominant the Gophers have been — albeit against iffy competition — in their own plodding way. They lead the nation in time of possession (40:34) by four minutes and in runs of at least 10 yards with 41.

Next: at No. 23 Florida State, Saturday.

Reality check: The latest model from the Wake Forest receiver machine is Jahmal Banks, who has 12 catches for 196 yards and four touchdowns the past two games.

Reality check: Seminoles are ranked for the first time in four years and the turnaround has signs of being real with a top-20 offense (7.27 yards per play) and top-40 defense (4.91 ypp).

Reality check: Somebody needs to go out of these rankings for Kansas and unfortunately Pitt is it.

Reality check: The Adrian Martinez that was promised arrived against Oklahoma, with 382 total yards and five touchdowns.