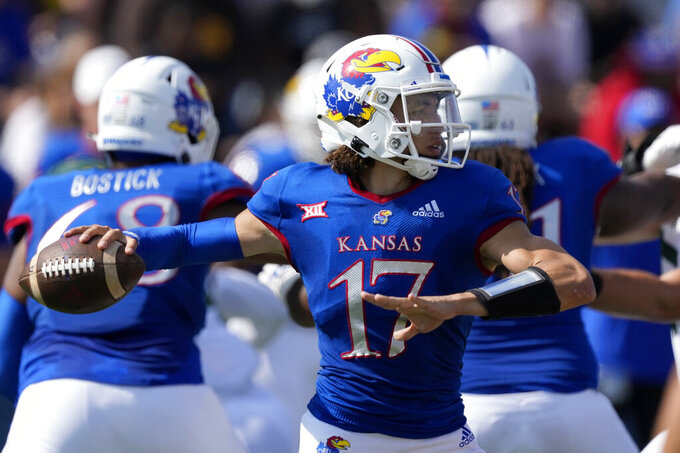 Kansas quarterback Jason Bean (17) passes to a teammate during the first half of an NCAA college football game against Baylor in Lawrence, Kan., Saturday, Sept. 18 2021. (AP Photo/Orlin Wagner)

LAWRENCE, Kan. (AP) — Dave Aranda spoke proudly this week about how Baylor had established an offensive identity on the ground this season.

It didn't change against Kansas on Saturday.

Gerry Bohanon threw for 269 yards and two touchdowns while running for another score, and Baylor had its way against Kansas on the ground, piling up 307 yards rushing in another dominant performance in a 45-7 victory on Saturday.

“Felt like our biggest competition to this point has been ourselves,” Aranda said. “It's been penalties, it's been turnovers. The ability to play a clean game where we can focus all our energies on the opponent, I think when we do that we can play at a really, really high level. You were able to see some of that and feel some of that in the second half.”

They played at the level defensively for most of the game. Kansas managed just 166 yards total offense.

Jayhawks quarterback Jason Bean was held to just 57 yards passing and a touchdown, though he did have 62 yards on the ground, before giving way to backup Jalon Daniels in the fourth quarter.

By that point, Baylor had turned a 14-7 halftime advantage into another rout.

The Bears rolled into Lawrence after a dominant performance against Texas Southern, when they had three 100-yard rushers, gained more than 400 yards on the ground and had five touchdowns rushing. And early on, their fleet of fast, powerful running backs were having a similarly devastating day.

Smith and Ebner gashed Kansas for big yards on their opening possession, and Bohanon capped it with a TD pass to Ben Sims. Then, the pair of Baylor running backs set up another touchdown by fullback Gavin Yates a few minutes later.

The Jayhawks? Their offense lost eight yards in the first quarter.

Yet they somehow managed to stay in the game — a fumble by Baylor's R.J. Sneed helped — and Bean led a 76-yard drive late in the first half that he finished with a short TD pass to Trevor Wilson to get within 14-7 at the break.

Must have touched a nerve in the Baylor locker room.

They forced a three-and-out to start the second half, and Bohanon immediately found Sneed for a 69-yard score to deflate the few Kansas fans that stuck around through halftime on a sunny, unseasonably hot afternoon.

“Here we are in a one-possession game in the third quarter for the second consecutive week,” Kansas coach Lance Leipold said, reflecting on a loss to Coastal Carolina last Friday, “and it kind of gets away from us. There's something there.

"We have to find a way to overcome that and do the things well we're not doing in the third and fourth quarter.”

Perhaps the Jayhawks can take a cue from Baylor.

After forcing a turnover on downs, they went right back down field, riding Smith and Ebner into the red zone. This time, Bohanon capped things off by taking a keeper for a touchdown that effectively put the game away.

“It just seemed like a lot of contact is taking place five, seven yards down field,” Leipold said. “Missed tackles, leverage issues, not playing aggressively — I think we're so tentative when we blitz and do things, you know? I don't know if it's a confidence issue, an experience issue, a strength issue or where we're at. That needs to continue to be evaluated.”

Baylor wasn't going to lose unless it committed too many penalties and turnovers. Well, the Bears coughed up the ball twice and they were whistled for a handful of fouls, but it still wasn't enough to let Kansas make it close. It helped that the Bears had some nice offensive balance with 269 yards passing and made some stops on defense.

Kansas was competitive for a half. The next step in its progression under Lance Leipold is to put together four quarters, something the Jayhawks have yet to do this season. That will only happen if they get better play along the offensive and defensive lines, which were soundly beaten by the Bears on Saturday.