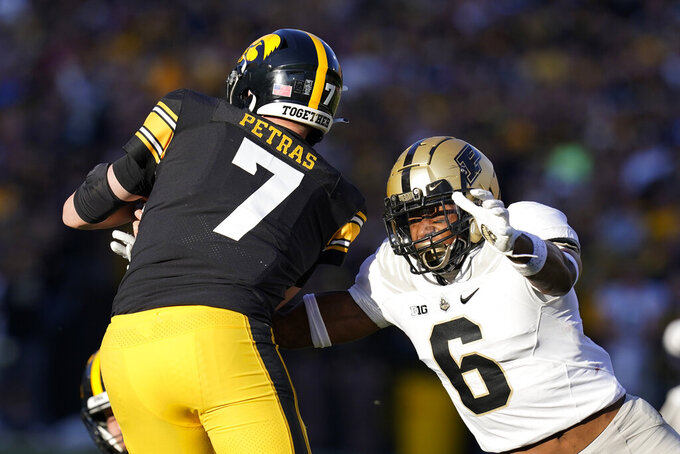 Purdue coach Jeff Brohm spent his bye week designing a creative game plan, capable of pulling off one of this season's biggest upsets.

He kept three quarterbacks on standby duty, asked receiver David Bell to play his typically dominant game and challenged his defense to deliver its best performance of the season.

The combination worked perfectly in a 24-7 upset of No. 2 Iowa and sent the Boilermakers back into the Top 25 for the first time in 14 years.

“Overall, it was the best execution we had all year long in all segments," Brohm said Monday, referring to his quarterback rotation. “It’s about scoring points, scoring in the red zone, moving the ball, getting first downs, whatever it takes, we’re going to do it. I think all of our quarterbacks provide an element that can help us win."

Brohm improved to 4-1 all-time against Iowa, Bell and safety Cam Allen were named the Big Ten offensive and defensive players of the week, and the Boilermakers are ranked No. 25.

Now he must figure out how to use his strategy against future opponents.

Up next is an old foil, Wisconsin, which has climbed back to .500 and is starting to play its traditional style — a heavy ground game and a stingy defense. Brohm has not beaten Wisconsin since arriving on campus following the 2016 season. After last weekend, he's also lost the element of surprise.

But it appears Brohm wants to continue using Aidan O'Connell, Jack Plummer and Austin Burton together in some form even if it's not the same format employed last weekend when all three threw passes and accounted for 10 of Purdue's 33 carries.

One reason Brohm opted to try it was out of necessity.

Top running back Zander Horvath went down with a leg injury in Week 2, hasn't played since and Brohm said Monday that he didn't expect Horvath to return this week. Without Horvath, the Boilermakers' running back depth has been depleted.

So Brohm figured he'd give it a shot and the three quarterbacks made sure it worked.

“The unselfishness from our quarterbacks really stood out," Brohm said. “They didn’t care who was in there, as long as they got a chance to go out there and play a little bit and have fun. They were excited about it. I even had Aidan suggesting one of the other quarterbacks go in as we got closer to the goal line on one occasion. So it was kind of refreshing and heartwarming."

They weren't the only Boilermakers having fun.

When a fan threw a beer can onto the field during the third quarter, offensive lineman Greg Long picked it up and dumped it inside his facemask, suds and all. The photograph became a social media sensation and even drew a favorable response from two-time All-Pro left tackle David Bakhtiari, who plays for the Green Bay Packers and wears the same number (69) as Long.

While some reveled, the deliberations over when to change quarterbacks and what plays to run left Brohm mentally fatigued.

“It wasn’t an exact science. It wasn’t something I had really done a whole lot before," Brohm said. “There was a little stress involved just making sure I picked the right time and moment. But some of that is you’ve just got to roll with it and be aggressive, and our guys really did a good job executing it."

The result: They're ranked for the first time since Oct. 1, 2007, before the 23rd-ranked Boilermakers lost to Ohio State and they plan to stick around for a while with a revamped approach.

“I didn’t know if three quarterbacks were going to work or not work. Sometimes it can look really good and sometimes it’s a complete bust, so it’s the chance you take," Brohm said. “I wasn’t sure I was going to have any success with it but we rode with it, and I thought a little bit of that worked."