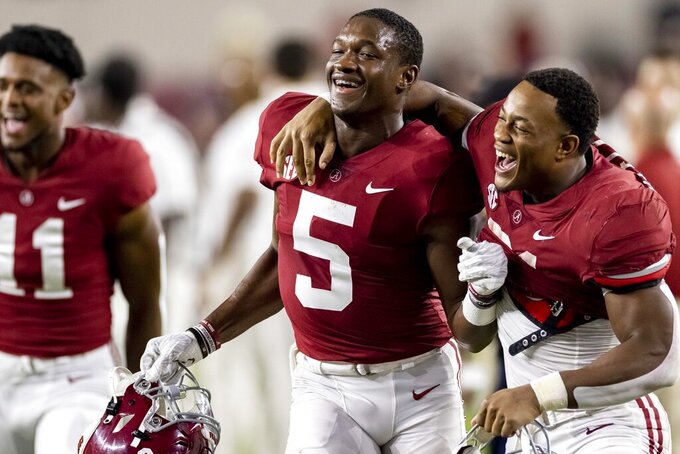 Alabama wide receiver Javon Baker (5) and Alabama running back Jase McClellan (21) celebrates after a win over against Southern Mississippi after an NCAA college football game, Saturday, Sept. 25, 2021, in Tuscaloosa, Ala. (AP Photo/Vasha Hunt)

The road to a Southeastern Conference championship showdown between No. 1 Alabama and No. 2 Georgia has plenty of potential pitfalls and detours.

The next two weeks present what look like serious challenges to the superpowers, starting Saturday when each hosts a ranked conference rival.

No. 8 Arkansas, coming off a victory against Texas A&M, visits No. 2 Georgia while No. 12 Mississippi and dynamic quarterback Matt Corral go to No. 1 Alabama.

The following week, both the Crimson Tide and Bulldogs hit the road. Alabama goes to No. 15 Texas A&M and Georgia is at No. 22 Auburn.

If the SEC behemoths can get through Oct. 10 still atop the AP Top 25, the six-week, 1-2 stint will be the longest for two teams from the SEC since 2000. In 2011, LSU and Alabama held the top two spots in the poll for five straight weeks leading into their Game of Century in early November.

Outside the SEC, the longest recent 1-2 run by two teams in the same conference came in 2006, when Michigan and Ohio State from the Big Ten held those positions for six week before their regular-season finale.

The Rebels and Razorbacks have a chance to inject some real chaos into a season that already has been a roller coaster. Or Alabama and Georgia will continue on their collision course.

The picks, with lines from FanDuel Sportsbook:

This is probably the best offense the Hawkeyes have faced ... MARYLAND 28-23.

Cougars expect to have QB Jaren Hall back after he missed last game with an injury ... BYU 34-24.

Nick Saban's record against his former assistant stands at 23-0 with Lane Kiffin returning to Tuscaloosa ... ALABAMA 42-31.

Razorbacks going for a third victory against a ranked team, something they have not done since 2011 ... GEORGIA 31-10.

Wildcats have won two straight meetings and have not won three in a row in the series since a five-game winning streak from 1993-97 ... OKLAHOMA 28-17.

Bearcats' best chance to stamp themselves a playoff contender ... CINCINNATI 24-23.

Gators have won 33 of the last 34 meetings, but Wildcats have been more competitive in recent years ... FLORIDA 31-21.

Buckeyes have won all seven meetings with the Scarlet Knights since they joined the Big Ten by an average of 43 points ... OHIO STATE 45-21, BEST BET.

Two teams that would rather not pass, kicking off at noon. Any chance it will be 42 degrees and cloudy for the full B1G experience? ... WISCONSIN 17-16.

Bulldogs' pass defense has been among the worst in the SEC; can that get the Aggies' passing game going with backup QB Zach Calzada? ... TEXAS A&M 30-20.

Bears tailbacks Abram Smith and Trestan Ebner are both averaging more than 7.0 yards per carry ... BAYLOR 23-20.

Considering the state of the rest of the Pac-12 South, this could decide the division ... UCLA 31-28.

Auburn QB T.J. Finley started five games for LSU last year as a freshman and could get the call in this one for his new team ... AUBURN 27-24, UPSET SPECIAL.

Can the Wolfpack avoid a letdown after a breakthrough victory against Clemson? ... N.C. STATE 34-17.

One of these teams might be pretty good. Or both. Or neither. Welcome to the ACC Coastal ... PITT 31-24.

Broncos are 16-1 against the Wolf Pack since 2001; the one victory for Nevada came with a quarterback named Kaepernick. Whatever happened to that guy? ... BOISE STATE 35-27.

Last time the Beavers beat USC and Washington in the same season was 2008; the Huskies have won nine straight in the series ... WASHINGTON 30-27.