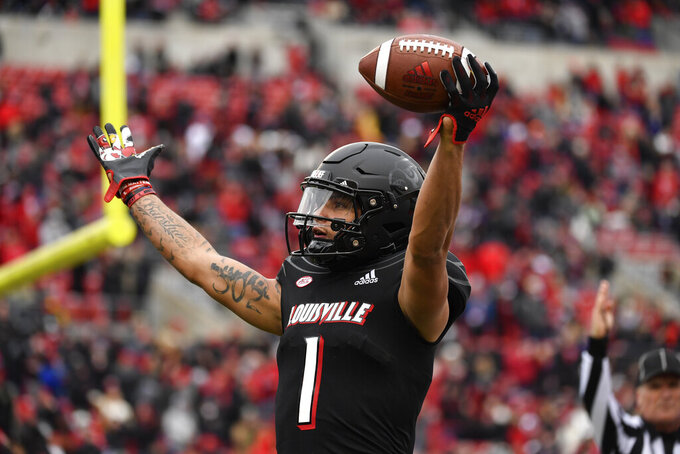 LOUISVILLE, Ky. (AP) — After a series of late collapses led to frustrating losses, Louisville finally played the complete game it has long sought.

No doubt, the presence of a Heisman Trophy winner in the house provided some inspiration.

Malik Cunningham threw for four of his five first-half touchdowns, and Louisville’s defense stifled Syracuse throughout a 41-3 rout on Saturday that snapped a two-game losing streak.

On a special day in which Louisville retired the No. 8 jersey of 2016 Heisman Trophy winner Lamar Jackson at halftime, the game featured Cunningham showing the same dynamic play of his famous predecessor. The junior quarterback provided all the scoring for the Cardinals (5-5, 3-4 Atlantic Coast Conference) before the ceremony with a 6-yard run on their first possession before tossing a series of TD passes.

Cunningham’s first was a perfect 33-yard toss to Tyler Harrell — one of two Cardinals wearing No. 8 for the time being — before he followed with a 6-yarder to Ahmari Huggins-Bruce, the first of two he caught. Jordan Watkins pulled in a 41-yarder in the back of the end zone before Huggins-Bruce took in another from 17 yards just before the break.

The Cardinals needed this kind of performance after losing four of five contests they led in the fourth quarter, including 30-24 last week to Clemson. They're now within a win of bowl eligibility, a goal that appeared to be slipping from their grasp with each disappointing defeat.

“It’s a good feeling in the locker room, knowing that (winning) one more game, one of the next two we’re sure in a bowl game,” said Cunningham, who finished 13 of 18 passing for 209 yards before exiting early in the fourth quarter.

“I was proud of our team with the resiliency they showed this week and how they came out today,” Louisville coach Scott Satterfield said. “We knew they were a good football team. Our defense came out and really shut down their offense, which is a tremendous feat itself because the running back was No. 2 in the country in rushing and that quarterback is really good as well. And our defense did a great job with holding him out.”

Louisville had just gone up 28-3 when Jackson entered the stadium, fittingly just before the eight-minute mark. His name and No. 8 were unveiled with a permanent plaque on the east upper deck of Cardinal Stadium, at the opposite end where Johnny Unitas' No. 16 was revealed before kickoff.

Cunningham's five TDs gave him 90 accounted for in his career, moving him past Chris Redman into second in school history. Jackson has 119. ... Harrell had three catches for 59 yards after entering averaging 30 yards per reception. ... Jalen Mitchell rushed 15 times for 102 yards, with 67 coming on Louisville's first two snaps that set up its first TD. ... James Turner kicked field goals of 33 and 27 yards.

Syracuse: The Orange looked to become bowl eligible but never got untracked on either side of the ball. Their defense couldn't contain Cunningham or Louisville's other skill players and the offense struggled to move the ball. The Orange failed on its first seven third-down chances and finished 3 of 14 overall. The low point was Shrader fumbling away a fourth-down snap at the Louisville 2 in the third quarter.

“It got away from us pretty quick,” coach Dino Babers said. “They were scoring touchdowns.”

Louisville: No discussion about fourth-quarter collapses this week as the Cardinals moved at will against the Orange. They scored on five of their first six possessions while their defense overwhelmed Syracuse throughout.

Louisville visits Duke on Thursday in its ACC season finale.