Diaz points to Miami’s ‘arrogance’ as a reason for problems 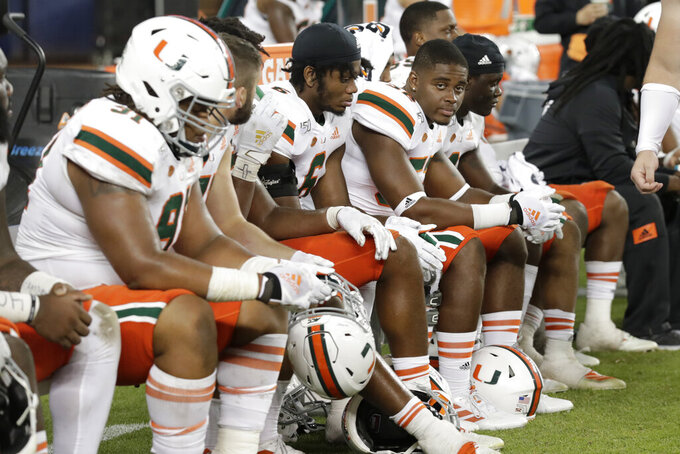 Miami players sit on the bench during the second half of the team's NCAA college football game against Florida International, Saturday, Nov. 23, 2019, in Miami. FIU won 30-24. (AP Photo/Lynne Sladky)

CORAL GABLES, Fla. (AP) — Miami football is supposed to have swagger. It is part of the Hurricanes' DNA, passed on from generations to the next and fueled by things like the memories of national championships, being a pipeline to the NFL, even now gaudy gimmicks like the Turnover Chain.

They even have a saying for it: "It's a ‘Canes thing, and you would not understand."

These days, apparently, it's the 'Canes themselves who do not understand.

Any sniff of success this year by the Hurricanes has been quickly snuffed out by something going haywire, the most damning example of that being a 30-24 loss on Saturday night to FIU — the school eight miles from Miami's campus that will have bragging rights for a good long time. Miami came into the weekend feeling it was starting to roll, having won three straight games.

For the 15th time in 16 years, Miami won't get to the 10-win mark. For the 16th time in 16 years since joining the Atlantic Coast Conference, the Hurricanes won't be league champions. That being said, Diaz has not lost the confidence of his boss — even now, after one of the most humbling losses in the program’s history.

“The light is always brighter here,” Miami athletic director Blake James told The Associated Press. “Whether it’s in good times or in bad times, at the University of Miami there’s always just a little more attention and I think that plays through to what Manny was touching on.

“As I’ve said all along, I think Manny has a great understanding of our program. I think he has an understanding of what it’s going to take to get our program competing for ACC and national championships and I’m confident he’s taking the steps that need to be done to get us back to that point.”

Diaz likes to call this era “The New Miami.”

It's definitely not the old Miami.

The Hurricanes are 6-5 going into this weekend's regular-season finale at Duke. A second-tier bowl game likely awaits them. A winning record is not guaranteed yet. They will almost certainly spend the entire season outside of the AP Top 25, the first instance of that since 2015.

"Our blind spot is when there's an expectation to win," Diaz said.

Diaz's Twitter feed can be somewhat rambunctious, especially in the way he has to make cryptic references to recruits committing since, under NCAA rules, he's not allowed to comment specifically about those players until they formally sign. He arrived for a booster club event this past spring on a yacht. He knows what can get the fan base excited in the offseason.

In season, though, all that matters is winning.

And Miami is sputtering, so the fans are most unhappy.

"You want that standard. You want to be at a place where that is the standard," Diaz said. "What I find that troubles us at times, and I think it got us this past week, is when things get good around here — and a three-game winning streak shouldn't be 'good' — but even that, when the sun does come out here, I think our team picks up on the natural arrogance that we have. And I'm guilty of that as well."