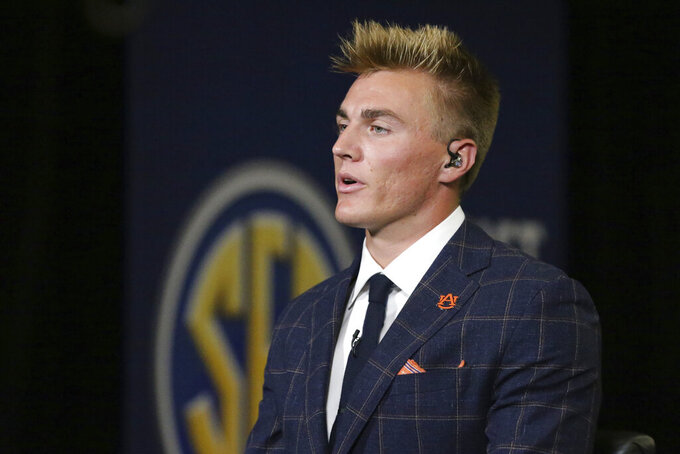 HOOVER, Ala. (AP) — Missouri and Arkansas both had some encouraging signs, if not great records, in their first seasons under new coaches.

Arkansas snapped a 20-game SEC losing streak with a win over Mississippi State and won two more league games in Pittman’s debut season. Now, he’s trying to figure out how to “jump” to the next level against a schedule that includes Texas, Georgia, Texas A&M, Auburn and Alabama.

“I wish I knew that. We’d jump all over the place,” Pittman said Thursday at SEC media days. “Here’s what I do know: It will be hard work. The weight room, the process of the program, the belief in the program.

Missouri went 5-5 in Drinkwitz’s first season, including wins over LSU and Kentucky.

“He’s done an unbelievable job turning this thing into The New Zou, as we call it now,” Cook said. “Just changing the mindset, changing the script on everything. We’re here to win games.

“We’re not known as the powerhouse of the SEC right now, but that’s what we’re going to get to. He’s done an unbelievable job. We have an energy that surrounds the program. He’s unreal. I haven’t really seen anything like it before.”

Fair, a graduate transfer defensive lineman from UAB, posted on social media on Sunday that “we comin to take the head off the ELEPHANT,” referring to the Crimson Tide’s mascot.

“I like the quote,” Tigers quarterback Bo Nix said. “I think it’s important because we’re not scared of Alabama. I know that a lot of people want us to be scared, but we’re really not.”

Nix said he was happy that Fair said it “because everybody at Auburn should come in with the mindset of beating Alabama.”

“I love it. I love the confidence,” Pappoe said. “It’s the biggest rivalry in the country, in my opinion. It’s just what comes with it.”

Most SEC teams lost and/or gained some players through the transfer portal, Arkansas included. But Pittman makes it clear he's not going to welcome back players who enter the portal intending to move on.

“Once you go to the transfer portal at the University of Arkansas, you sure ain’t transferring back in,” he said. “I’m pretty sure, if I asked (wife) Jamie, if I go to transfer for a week and figure it out would she let me come back, I’m sure the answer would be no. That’s the way we feel about that too.”

By Jim Vertuno And Pat Eaton-Robb 26 minutes ago
By John Coon 11 hrs ago
By Pete Iacobelli 13 hrs ago
By Dave Campbell 17 hrs ago
By Anne M. Peterson 19 hrs ago