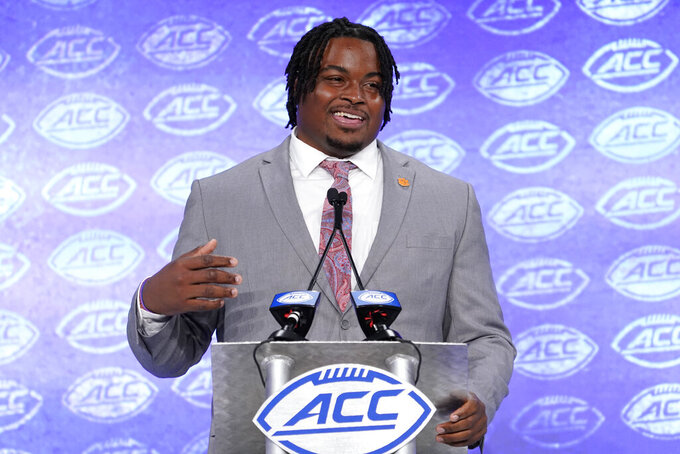 CHARLOTTE, N.C. (AP) — The biggest obstacle standing between Clemson and a fifth straight Atlantic Coast Conference championship may be an early season Sept. 14 matchup at Syracuse.

Clemson has largely breezed through the ACC schedule over the last four seasons, going 34-2 in conference play while winning four straight conference titles and two national championships. The Tigers have defeated conference opponents by an average of 22 points during that four-year span, and few have been able to compete with them.

That is, except the Orange.

Coach Dino Babers' squad stunned No. 2 Clemson in 2017 27-24 at home. Last year the Orange gave Clemson another big scare at Death Valley before falling 27-23 after a touchdown run by Travis Etienne with 41 seconds left.

This year the game moves back to Syracuse, where the Orange didn't lose in 2018.

"Dino has created the belief in his team that they can win," said Clemson coach Dabo Swinney said Wednesday at ACC media days. "And I don't see them going away anytime soon."

Babers said beating Clemson two years proved to his players they're capable of beating anyone.

"You've seen the mountaintop, OK? You've seen what it looks like," Babers said. "You know how difficult it is. I think that gives us a little bit of an edge that we know we can. That doesn't mean you will. I mean, the last time that those young men at Clemson lost, the year was 2017. It's 2019 now."

"We play them like anybody else," DeVito said. "You can't just make them special because they are Clemson and they have that name. It's the same way you approach a lesser opponent."

Swinney knows the Tigers will be heavy favorites to repeat as ACC champions with Etienne, quarterback Trevor Lawrence and wide receiver Justyn Ross returning. He said by now having a so-called target on their chest is "business as usual" given Clemson has won at least 10 games in eight straight seasons, including a 15-0 campaign last year.

Swinney said the key is Clemson never looks back on its past success.

"We don't carry anything over," Swinney said. "... We redevelop leadership, reinstall our core values. We show up every year with something to improve."

Syracuse won 10 games last season for the first time since 2001.

The Orange figure to be Clemson's toughest test in the Atlantic Division with North Carolina State, Boston College and Wake Forest all facing quarterback questions and Florida State and Louisville in rebuilding mode.

While being in Clemson's division may not appear to be the ideal situation for everyone, Babers embraces the challenge.

"When you go outside the conference and you start playing other teams, I mean, what is there to be fearful of?" Babers said. "When you're in the ACC Atlantic, your big brother is as big as anybody on the street, OK? If you can handle him, you're going to have an opportunity to handle anybody else."