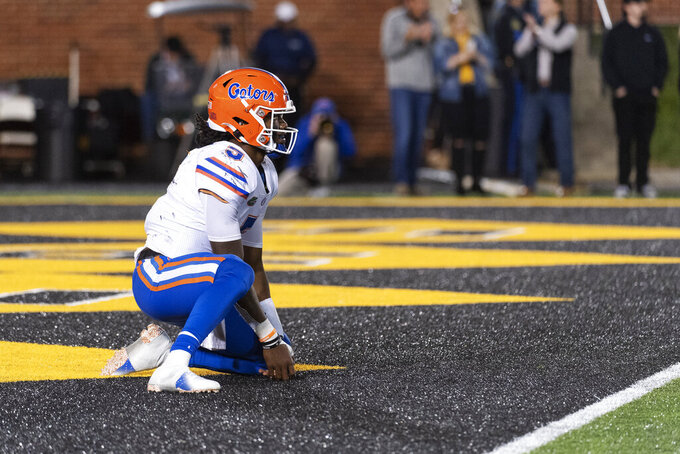 Florida quarterback Emory Jones sits in his end zone after an incomplete pass during the fourth quarter of an NCAA college football game against Missouri, Saturday, Nov. 20, 2021, in Columbia, Mo. (AP Photo/L.G. Patterson) 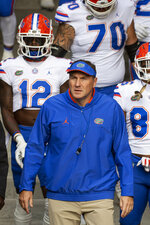 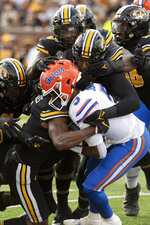 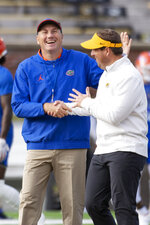 One bad season at Florida was one too many for Dan Mullen.

The standard for success when it comes to coaching the Gators is about as high as it can get in college football.

Florida fired Mullen on Sunday, a day after his sixth loss in nine games, two months after the Gators went toe-to-toe with defending national champion Alabama and a year after they had a chance to make the College Football Playoff.

"This is a place where you should have a high level of success over a long period of time,” Florida athletic director Scott Stricklin said.

Stricklin said he made the decision Sunday morning and offered Mullen the chance to coach the team's final game, but he declined for fear of being a distraction.

How did it all go so wrong so quickly for Mullen?

“I don’t know,” Stricklin said. “I have some thoughts, but I’m going to keep those to myself."

It wasn't enough, and the Gators are in the market for a coach for the fourth time since Urban Meyer left with two national titles on his resume after the 2010 season.

“We talk about competing for championships and we talk about having a championship experience with integrity; Florida's a place you have the right to aspire to that,” Stricklin said.

He then made a pitch to prospective candidates who might have other options in a crowded market that incudes LSU and Southern California looking to fill vacancies.

“We got a great university. We have an incredibly passionate fan base. We’ve invested a lot in facilities. One thing that doesn’t get talked a lot about, we have incredible alignment among our university hierarchy. You know, from the Board of Trustees, (university president) Dr. Ken Fuchs, myself, the University Athletic Association Board. Gator boosters board," Stricklin said.

The Gators have an $85 million standalone football facility opening next year, an upgrade that’s been years in the making. That and being surrounded by Florida’s fertile recruiting pool should make the Sunshine State’s biggest college football job even more attractive.

Florida is likely to be linked to most of the top coaches who have already been speculated as candidates at LSU and USC, including Oregon’s Mario Cristobal, Cincinnati’s Luke Fickell, Penn State’s James Franklin, Mississippi’s Lane Kiffin and Louisiana’s Billy Napier. What about making another run at former Oklahoma coach Bob Stoops, a former Gators assistant under Steve Spurrier?

“We want someone who has high expectations and has a plan to how they can sustain that for a long period of time,” Stricklin said. “There’s going to be a lot of competition marketplace and I really don’t want to share what our criteria or what we’re going to prioritize right at this moment.”

Mullen's final game was a 24-23 loss in overtime at Missouri on Saturday night that spotlighted Florida’s flaws: inconsistent quarterback play, a porous offensive line, a lack of playmakers on both sides of the ball and an inability to win close games. The Gators dropped seven consecutive one-possession games, all in the last two seasons.

Stricklin wanted to give Mullen every chance to turn things around — especially since the team was ranked sixth in the CFP standings just a year ago. He even rewarded Mullen with a raise to $7.6 million in salary this year and a contract extension through 2026 in the offseason — but it became clear Mullen was losing support of top administrators, key boosters and fans.

The Gators will pay Mullen a $12 million buyout spread over seven installments, with a $6 million payout coming within 30 days. Mullen will then get $1 million every July 15 through 2027. Six of Mullen’s assistants have expiring contracts.

Mullen fired two close friends and top assistants following a 40-17 drubbing at South Carolina earlier this month, but parting with defensive coordinator Todd Grantham and run game coordinator John Hevesy did little to get Florida back on track. The Gators allowed 52 points to FCS Samford the following game but did manage to rally for a victory.

Mullen's offensive acumen made him one of the best play-callers in the SEC for the past 15 years – including nine as Mississippi State’s head coach, the rest in Gainesville – but his recent issues overshadowed all his prowess.

Mullen’s recruiting has been the root of his on-field problems and his strong-willed ways landed him in hot water last year after he doubled down on wanting to pack Florida Field despite the pandemic.

He got Florida placed on NCAA probation for the first time in 30 years and was dealt a show-cause penalty for recruiting violations. He was fined and reprimanded by the SEC for his role in a benches-clearing fight last season and was widely criticized for tone-deaf comments following two losses.

Now Florida is ready for another reset.

“We’re going to put the resources necessary into making the right decision to get the right person in and the right structure around that person for us to be successful,” Stricklin said. “And we’re very blessed to be in a place that we do have some resources.”