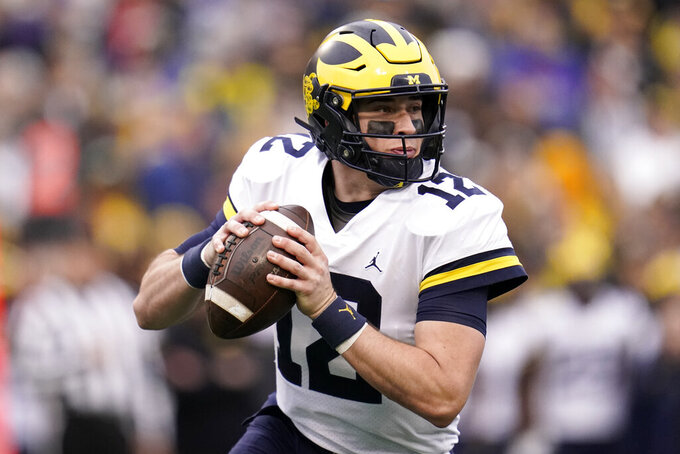 Michigan quarterback Cade McNamara looks to throw a pass against Maryland during the first half of an NCAA college football game, Saturday, Nov. 20, 2021, in College Park, Md. (AP Photo/Julio Cortez) 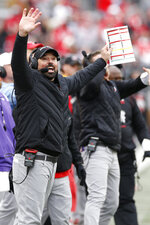 COLUMBUS, Ohio (AP) — This year's version of The Game could hardly be bigger.

The annual clash between Ohio State and Michigan, held this year on the Saturday after Thanksgiving, is already juiced by a century of tradition, mutual hatred and fanaticism.

A lot more than bragging rights are at stake this year in Ann Arbor for the No. 2 Buckeyes and No. 6 Wolverines.

The winner clinches the Big Ten East and advances to the conference championship game Dec. 4 — and stays alive for the College Football Playoff.

The loser picks up a second loss and will consider the season ruined.

“We’ve just been preparing for that team all winter, all summer," Ohio State senior defensive end Tyreke Smith said. "Got that game always on our minds.”

Ohio State also has won the last four Big Ten championship games. The Wolverines (10-1, 7-1, No. 6 CFP) are looking for their first ever appearance in the Big Ten title game, which was first played 11 years ago. Michigan hasn't won the conference since 2004.

A glaring subplot in all this is that Jim Harbaugh has never beaten Ohio State in five tries as the Michigan coach, a continuous source of frustration among Wolverines fans and gleeful schadenfreude in Columbus.

This may be Harbaugh's best team and best chance yet. The Michigan defense is among the top 10 in the FBS and might have a chance to slow down the Buckeyes and the nation's most prolific offense (560 yards, 47.2 points per game).

Redshirt freshman quarterback C.J. Stroud was 32 of 35 for 432 yards and school record-tying six touchdowns — all in the first half — in last Saturday's 56-7 rout of Michigan State, a week after he threw for five TDs in a blowout of Purdue.

The Ohio State defense had one of its best games of the season, neutralizing Michigan State's Heisman hopeful running back Kenneth Walker III, who gained just 26 yards.

The Buckeyes' loss to Oregon in Week 2 is a distant memory.

“The chemistry has been built on the field," Ohio State defensive tackle Haskell Garrett said. "Each week we’ve gotten better.”

Michigan also enters the game on a high note. Cade McNamara threw for two touchdowns and Hassan Haskins ran for two in the Wolverines' 59-18 win over Maryland last Saturday.

“We’re a confident team. We know what we’re capable of," McNamara said. "We’re fired up and we’re ready. This is the week.”

The only blemish on the Michigan record is a 37-33 loss to Michigan State on Oct. 30.

“Everything that was planned, built for, all the energy that was put in since way back in early 2021 – January, February – all the things that the guys have done, the coaches have done, has put us in this position," Harbaugh said. "That’s the position we wanted to be in, and we want to finish it.”

This story has been corrected to show that the game is Saturday, not Friday.