Georgia vs Georgia Tech: A rivalry that lost its luster 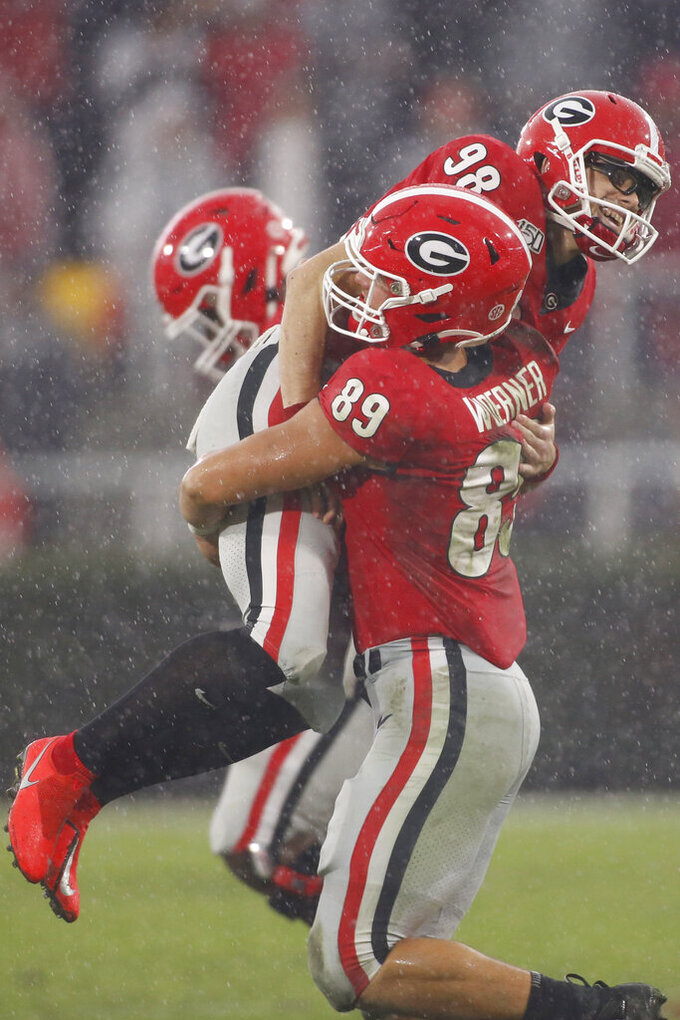 Georgia placekicker Rodrigo Blankenship (98) celebrates with Georgia tight end Charlie Woerner (89) after kicking a filed goal in the first half of an NCAA football game between Georgia and Texas A&M in Athens, Ga., on Saturday, Nov. 23, 2019. (Joshua L. Jones/Athens Banner-Herald via AP) 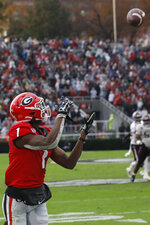 ATLANTA (AP) — This rivalry has lost its luster.

Sure, there are plenty of harsh feelings when Georgia takes on Georgia Tech in anything, but the football match-up has becomes so one-sided it’s hard to even call it one of the most anticipated games on the Bulldogs’ schedule.

For No. 4 Georgia, it appears little more than a minor sting.

The game at 55,000-seat Bobby Dodd Stadium didn’t become an official sellout until this week; even then, Georgia Tech still had some tickets remaining in its student allotment.

“Georgia has so many rivalries that you can't say one's more important than the other,” coach Kirby Smart said, referring to Southeastern Conference showdowns such as the “Cocktail Party” game against Florida and the Deep South’s oldest rivalry vs. Auburn.

Georgia Tech is more about the memories.

The Bulldogs have dominated their state rivals pretty much from the day Vince Dooley took over between the hedges in 1964, winning 41 of the last 55 meetings. Georgia Tech hasn’t defeated the Bulldogs in Atlanta since an overtime thriller two decades ago, losing nine straight since then on its home field.

In a way, this has become the game Georgia can’t afford to lose, rather than the one it looks forward to winning more than any other.

That’s the case again this season with the Bulldogs gearing up for the SEC championship game against top-ranked LSU and a chance to claim a spot in the College Football Playoff.

“You don't think it’s important, then lose it and then it will be really important,” Smart cautioned. “I know the importance of this game and I know the significance it has to so many of our fans, especially the crowd that may be older when traditionally Georgia Tech was a national powerhouse year in, year out.”

Georgia Tech has gone through a difficult transition under first-year coach Geoff Collins, who needs a monumental upset to avoid matching the fewest wins in a season since 1994.

Collins knows that the burden is on the Georgia Tech to change the perception of its series against the Bulldogs.

“The thing I've talked a lot about is getting this game back on the national stage that it deserves to be,” he said.

Some other things to watch for when the Bulldogs take on the Yellow Jackets:

Georgia quarterback Jake Fromm is in a full-fledged slump, having failed to complete even half his passes in three straight games.

His woes are even more glaring when put up against the constant comparisons to his former backup. Justin Fields spent one season at Georgia, where he played sparingly behind Fromm before transferring to Ohio State.

Leading the No. 2 Buckeyes to 11 straight wins, Fields has completed 69.4 percent of his passes for 2,352 yards, with 33 touchdowns and just one interception. He also has rushed for 445 yards and 10 TDs.

NO ROOM TO RUN

Sophomore running back Jordan Mason has provided a spark to the Georgia Tech’s offense, rushing for 862 yards and seven touchdowns including a 141-yard effort against N.C. State in the Yellow Jackets’ last game.

But he could find it difficult to run on the Bulldogs, who have allowed just 68.5 yards per game on the ground — second in the nation behind Utah. Last week, they held Texas A&M to minus-1 yards rushing.

Both teams are getting key contributions in the passing game from freshmen.

Georgia’s George Pickens in a dynamic prospect who has already drawn comparisons to former Bulldog great A.J. Green. The 6-foot-3, 190-pound Pickens has 32 catches for 457 yards and five touchdowns.

Ahmarean Brown doesn’t have Pickens’ size, but the 155-punder tops the team with 20 catches for 393 yards and seven TDs, averaging nearly 20 yards per reception. He has tied Calvin Johnson’s school record for most scoring catches by a freshman.

Going through a jarring switch from the triple-option used by previous coach Paul Johnson to a more conventional offense, Georgia Tech’s passing game is still a work in progress coming to the final game of the season.

James Graham is the school’s first freshman quarterback to throw for 1,000 yards in a season since Reggie Ball in 2003. But Graham has completed just 47.4% of his throws, with 11 TDs and seven interceptions.

Like other spots on the field, Georgia has a big edge in the kicking game.

Rodrigo Blankenship is a finalist for Lou Groza Award and the leading scorer in school history. He has connected on 23 of 26 field goal attempts, including three from at least 50 yards. He also holds the school record by making 190 consecutive extra points.

Georgia Tech has attempted just seven field goals all season. Brenton King is 3 of 6, with the longest coming from 42 yards, while Wesley Walls missed his only try.