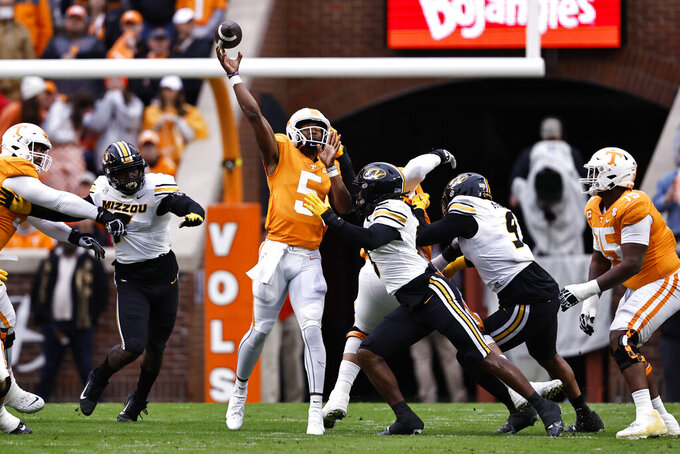 Tennessee's spot in the College Football Playoff. The Vols are in prime position, fifth in the CFP, to let other contenders ahead of them stumble as long as they keep winning. South Carolina, already bowl eligible, is hoping to end a run of three straight losing SEC seasons with a victory over Tennessee.

Tennessee receiver Jalin Hyatt vs. South Carolina's secondary. Hyatt is familiar with success at South Carolina's Williams-Brice Stadium. He caught three touchdowns as Dutch Fork's star wideout to win the 2019 South Carolina state championship. He leads the SEC with 111 yards receiver per game and 15 TD catches. But the Gamecocks are fourth in SEC pass defense and tied for the league lead with 11 interceptions this season.

Tennessee: QB Hendon Hooker has been unstoppable this season and the kind of dynamic, dual-threat player who gives South Carolina fits. Hooker leads the SEC in pass completion percentage and pass efficiency rating. He's averaging nearly 289 yards per game through the air.

South Carolina: P Kai Kroeger is second in the SEC with an average of better than 45 yards a kick. He's also been a special teams' standout who's 3-of-3 passing including a 45-yard TD throw to Dakereon Joyner in last week's 38-6 loss at Florida.

Tennessee leads the country in total offense (523.7 yards per game) and scoring (47.7). ... South Carolina has lost its past three games to Tennessee, two of them by 20 or more points. ... The Vols top the SEC with a plus-9 turnover margin, only once this season (a 52-49 OT win over Alabama) failing to gain more turnovers than their opponent. ... Gamecocks coach Shane Beamer was a graduate assistant coach at Tennessee under national championship coach Phillip Fulmer. ... Beamer and Tennessee coach Josh Heupel were co-winners of the Steve Spurrier First-Year Coaching award last season. ... The Gamecocks are 1-4 in Beamer's two seasons against Top 25 opponents. The lone victory came this fall at Kentucky. ... The Vols finish with road games at South Carolina and Vanderbilt, the first time they've closed a season with back-to-back road games since 1939.